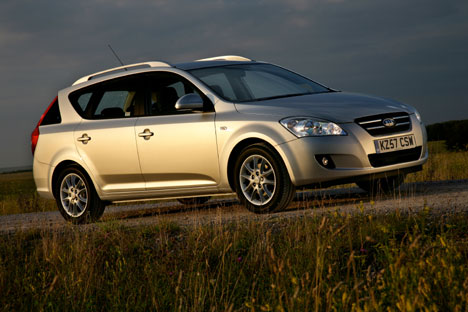 The Cee’d has been pretty well received since Kia launched it earlier this year.

Not because it’s a great car – it isn’t. And not because it looks fantastic – it doesn’t.

It’s more that the hatchback is, by far, Kia’s best car to date. It’s a decent all-round performer that does everything it sets out to do and probably surprised a few people in the process.

Kia is looking to the Cee’d to help raise its reputation and the new SW version is a continuation of those hopes.

This is the first estate Kia has made and its enlarged boot makes it more of a fleet car than its five-door brother.

The Cee’d SW has a 534-litre boot capacity and another 55 litres under a flap in the floor.

The styling looks a little derivative – from the side the rear quarter of the car looks like a Peugeot 407 SW, and from the back the tail lights have more than a whiff of Volvo about them.

Power comes from a number of 1.6-litre engines. One is petrol-fuelled and develops 120bhp, and two are turbodiesels with either 89bhp or 113bhp.

Five-speed manual gearboxes are standard, although a four-speed automatic is available with the petrol engine and should be an option on the diesels from November.

Kia’s managing director Paul Philpott said despite fleet dominance in this sector, he hoped to grow the retail market so SW sales were split evenly between sales to businesses and the general public.

Being a value-for-money brand, expectations aren’t generally high when it comes to quality, but the Cee’d is a pleasant surprise.

Everything inside is well laid out and comfortable, with decent seats and MP3 player connections included as standard.

The boot is a good size with plenty of handy storage pockets to stop smaller items rolling around. Nothing about the way the Cee’d drives is great, but nothing’s that bad either. The steering lacks in directness and feel but not excessively so.

I drove the 113bhp diesel engine first and it was fine, with enough grunt to haul a full boot and overtake. The petrol engine is best avoided however – it’s pretty gutless and requires excessive revving to get anything out of it.

The Cee’d SW continues Kia’s good work with the hatchback Cee’d. With plenty of standard equipment and prices from £13,745, it represents good value. Just don’t be tempted by the cheaper but asthmatic petrol version.