KIA is to introduce a diesel version of its new Magentis saloon in a bid to win more fleet business and gain a 2% share of the upper-medium market.

The new Magentis, which is taller, wider and longer than the previous version, is poised to put extra pressure on the UK’s leading fleet suppliers, believes Kia Motors managing director Paul Williams.

He said: ‘Diesels account for 65% of registrations in the upper-medium segment and our second-generation engine gives us a huge opportunity to raise our presence in the fleet market and with user-choosers.’

In an interview at the international launch of the Magentis, he described the four-door saloon range as a ‘another big step forward’ in his plan to win a 2% share of the segment dominated by Vauxhall and Ford.

He said: ‘Since the demise of the Rover 75, we’ve seen a lot of evidence that suggests a niche exists for this kind of car in the daily rental market. We now have a modern, credible contender and we aim to exploit it.’ 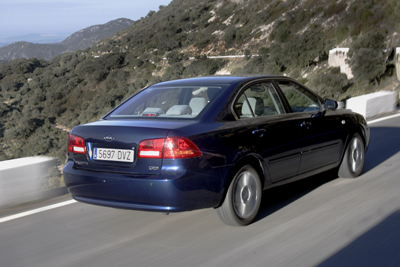 The new Magentis offers significant improvements in head, leg and shoulder room and offers spaciousness approaching limousine levels for passengers in the rear.

Williams added: ‘I see this as a key factor in the car’s success. This is our answer to the Skoda Superb and I think it will give us a lot of appeal in the taxi and chauffeur-drive sectors.’

Despite being bigger, the bodyshell is stronger, but the use of high tensile steel for increased rigidity means the car is no heavier and further weight savings have come from the adoption of strut suspension at the front and a new layout at the rear.

In its new guise, the Magentis uses a longer wheelbase to improve stability and ride comfort and its smooth, understated shape – a welcome change from the previous, over-chromed styling – has better aerodynamics that provide a significant reduction in wind noise at speed as well as contributing to improved fuel efficiency.

Though a new 2.0-litre petrol engine with continuously variable valve timing and an upgraded quad-cam 2.7-litre V6 unit will be offered, the 2.0 CRDi diesel is expected to prove the most popular choice and will available in two trim levels.

Petrol models will go on sale in May and the diesels will follow in June.

Williams said: ‘Our plan is to pick up business from Skoda, which has done very well with the Octavia. We will continue to offer terrific value for money, but Kia is no longer the cheapest car on the block and the new Magentis will be 35% to 40% dearer than the car it replaces. 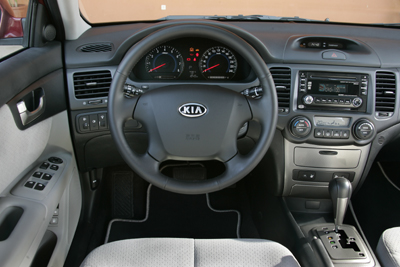 According to Williams, low pricing will yield sales of at least 1,600 next year as Kia aims to achieve total registrations of between 55,000 and 60,000 following the launch of its new ED, the Ford Focus/Vauxhall Astra rival it will produce in Europe from December.

‘Now that we have a strong mid-size contender, we will develop the business infrastructure to support further fleet growth this year to help reach our sales target of 43,000 units, which will represent a growth of 20%.

‘The upper-medium sector has declined, primarily due to increasing pressure from niche markets that have developed with MPVs and mini-SUVs, but we are certain that we can win a reasonable share of the business. We are convinced there is a need for a car like the Magentis.’

ENGINE technology at Kia used to be old hat – but not any more. Boosted by the latest variable geometry turbocharger, the firm’s 2.0-litre turbodiesel is as refined as they come and able to compete with the best.

Mating it with a nicely-spaced six-speed gearbox turns the Magentis into a surprisingly good all-rounder, pulling sturdily from as low as 1,000rpm. Little mechanical noise reaches the cabin at any speed and a long-legged overdrive top ratio provides impressively quiet, effortless and economical motorway cruising.

Unfortunately, our driving experience was let down by a notchy, sometimes obstructive change action – but as both the examples we tried were prototypes, the chances are that this will be remedied on production models.

Thanks to good roadholding, a well-damped ride, nimble handling and power steering that weights up nicely as the speed rises, the latest Magentis has the demeanour to match the conservative, more upmarket styling that is streets ahead of anything the firm has produced in the past.

Significantly, as well as looking good, it feels good too. The car appears well built and its doors make a reassuring ‘clunk’ as they close.

Trim quality seems substantial, there’s lots of storage space and a soft-mould dashboard represents a marked improvement, although the centre console is still decidedly low-rent. Instrumentation and switchgear might still lack the logic, clarity and precision of European rivals, but at least the dash now boasts an in-car entertainment system with controls that are legible and easier to operate.

With generous luggage capacity and good interior packaging, the new Magentis ticks all the boxes as practical transport, particularly in diesel form – and it’s easy to understand Kia’s confidence in the car’s future with taxi fleets. 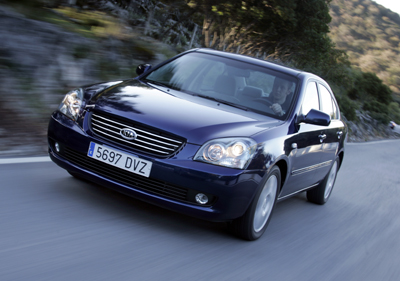 IT IS hard not to be impressed by the Magentis, which is miles better and has so little in common with the current model that it should have been given a new name. If the brand’s residual values continue to harden, it should be a winner with fleet bosses who are more concerned with the bottom line than badge-consciousness.