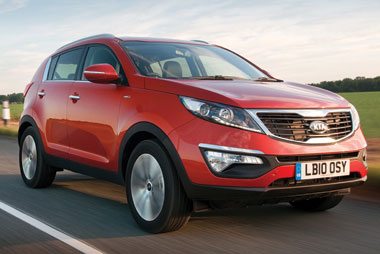 Early-bird buyers have snapped up a special limited series of the next new car from Kia.

As part of plans to promote its next-generation Sportage, Kia secured 850 early production examples for delivery in the run up to the launch of the full range in November.

But advance orders mean most will now go directly to customers rather than featuring in showrooms.

Interest in the initial version augurs well for the Sportage, which has adopted a smoother, more sophisticated crossover guise to replace its former rugged character as a practical compact sport utility.

Likely to be priced from under £17,000, the range is expected to boast a new 1.6-litre direct-injection petrol engine fitted with stop/start technology offering more than 50mpg.

Exhaust emissions below 140g/km from a new 1.7-litre diesel motor also promise to make it a significant player in next year’s drive for fleet sales expansion.

Wearing First Edition badges, it is powered by another new Korean turbo-diesel unit sized at 2.0-litres.
Linked with a six-speed manual gearbox, it returns 47.1mpg, 7.3mpg better than the previous unit.

With 15% more torque, the latest CRDi reaches 62mph in 10.9 seconds and goes on to 112mph all-out, while a 90kg reduction in body weight and improved aerodynamics also contribute to a 31g/km reduction in emissions at 156g/km.

The car’s urbane exterior appearance comes with a full-luxury finish to its comfortable and spacious interior.

Seating for five is trimmed with leather and all occupants have the benefit of heated seat squabs. Dual-zone climate control is fitted.

Significantly, the latest Sportage drives as well as it looks and buyers are unlikely to be disappointed by the way the car handles.

Kia claims the longer, lower and wider Sportage’s increased track width and a front-biased electronic all-wheel drive system allow it to remain transport that’s more than capable when towing and in most off-road conditions.

But to make sure, electronic stability control is linked to three other computer systems that limit speed to 5mph when descending steep slopes, prevent roll-back on hill starts and trigger side and curtain airbags.

“We think our new range will line up well against the Nissan Qashqai and Ford Kuga and have high hopes.

“We think the lower-power cars will be particularly well received and expect the range to account for around 10,000 registrations next year, with up to one-third going to fleets.”