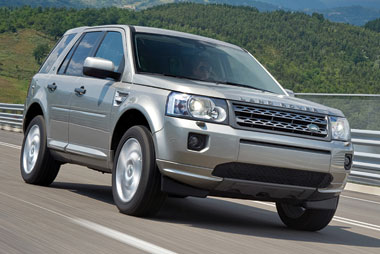 Revisions to the Freelander 2 model change that, though, with Land Rover now able to offer a sub-160g/km model.

It’s called the eD4, and offers CO2 emissions of 158g/km and an official combined consumption figure of 47.1mpg.

To achieve that figure Land Rover has omitted its four-wheel drive hardware.

While that might have been previously unthinkable at Land Rover, it seems buyers are coming round to the idea, with around 25% of UK SUV sales being front-wheel drive.

It allows Land Rover to better fit the environmental zeitgeist and – as a run around a tricky off-road course on its launch proved – does little to dent the Freelander’s off-road ability.

The eD4 represents a cheaper starting point in the Land Rover range too, with the base level 2.2 eD4 S priced at £21,995.

That presents something of a problem.

Both BMW’s new X3 and Audi’s Q5 offer models that rival and better the eD4’s emissions and mpg performance. The X3 in particular highlights this, with CO2 emissions of 149g/km – putting it in VED band F rather than the eD4’s G – and a combined consumption figure of 50.4mpg.

On the road, the Freelander 2 eD4’s front-driven status does little to change the way it drives.

However, despite a fine ride it feels less sophisticated both to drive and to sit in than either of its German alternatives.

While there has always been aspirational appeal behind the Land Rover brand for company car drivers, at last the Freelander is able to back it up on emissions and fuel efficiency.