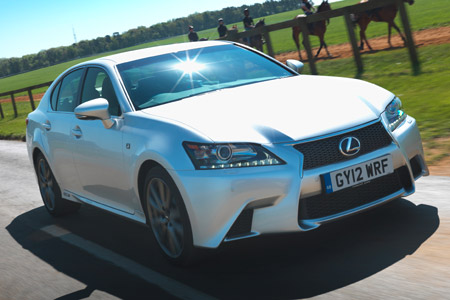 Imagine yourself in a small, but comfortable room. There is a large and supportive leather armchair, but no other objects. The room is sealed. Listen. What you can hear is probably overwhelming silence, and it’s remarkably similar to what can be heard when travelling behind the wheel of the new Lexus GS 450h.

The all-new model, while making a renewed attempt at injecting more emotional appeal into the styling of the car, offers a range of exceptionally well equipped variants and far lower CO2 emissions than the six-year-old out-going GS 450h. Near-silent running comes as standard.

Advanced hybrid components and repackaging means the GS 450h comes with a decent-sized boot for the first time (room for four full-size sets of golf clubs).

Unusually, Lexus has also decided to offer an entry-level GS 250 – without the hybrid components – in the UK, which appears well priced against premium rivals, but suffers from poor fuel consumption and high CO2 emissions.

However, the company will eventually offer a hybrid version with this 2.5-litre engine alongside the 3.5-litre V6-equipped GS 450h, with an opportunity of reaching even higher levels of fuel economy and lower CO2 emissions.

The 250 engine starts with SE as the entry-level trim, but this lower grade will not be offered on the 450 hybrid which starts with the Luxury – one level higher.

Customers will also be able to choose a more aggressively styled F Sport variant, with the Premier version sitting at the top of the range.

Although the GS performs the usual full hybrid trick of travelling on electric power only for short distances at low speeds, even when the engine is running – unless you’re accelerating hard – the cabin is almost impossibly quiet.

The interior has a more luxurious appearance and feel (especially at the top end of the range) than perhaps any other rival, and while it might not have the glitziness of the Jaguar XF, it certainly matches the Audi A6 for its assured solid feel if not its utterly clean appearance.

Lexus’s control interface – as in the RX 450h – has its computer mouse-like cursor with point-and-click functionality making accessing menus and actions a little easier than in some other cars.
Performance, with a combined powertrain output of 345bhp, is brisk when necessary, although the car can run in eco and sport modes, which has an effect on the throttle response.

It isn’t as involving as an XF or a 5 Series (which now has a rival hybrid), but customers probably won’t choose the GS for driving dynamics.

However, for quality, refinement and efficiency, the GS sets a new benchmark.