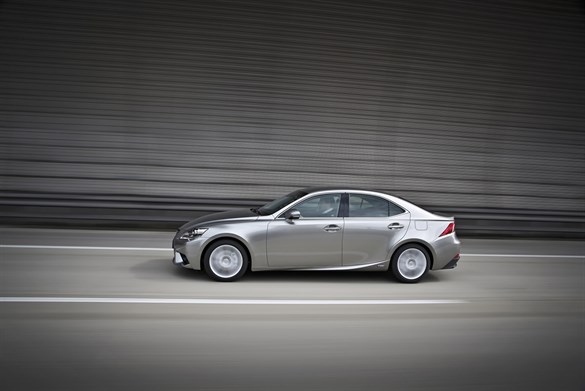 Lexus has always had an uneasy relationship with diesel engines. Understandable when you consider that the brand’s most important market during the last 24 years has been North America, where diesel remains a small niche in the car market.

The second-generation Lexus IS model, launched in 2006 offered customers diesel for the first time, but a combination of a single engine with so-so CO2 emissions in a manual-only format wasn’t a great draw.

However, during that time Lexus has continued to develop petrol-electric hybrid technology, and it feels whatever the most desirable diesels for fleet operators can offer in the sector, it can do better.

Fuel economy figures are evenly matched as the slightly lower figure of 65.7mpg for the Lexus is offset slightly compared with diesel rivals because of the lower pump price of petrol.

So the rational argument seems fairly strong. But what about the emotive argument, which is typically fairly strong when it comes to user chooser cars? Well there seems to be a little more soul in the styling, which is heavily influenced by the LF-CC concept car that appeared at the 2012 Paris Motor Show.

The car is larger than the IS it replaces with much of its extra length going into the wheelbase, liberating some much-needed rear leg room. The body is also stiffer than before promising more responsive handling as well as a more comfortable ride.

And if the entry-level SE (which has some features that you’d pay extra for on rival products) with its low-CO2-friendly 16-inch wheels doesn’t for the bill, the 109g/km F-Sport variant, with a more aggressively styled front end, and more sporty features might be more alluring.

It still has a lower BIK tax band (and annual payments) than 109g/km premium rivals.

From a performance standpoint, the IS 300h squares up to its rivals. It is almost as quick in the 0-62mph spring as the BMW 320d EfficientDynamics auto, and is around the same as the Mercedes-Benz C220 CDI auto.

Lexus would argue that the IS does all of this while providing a higher level of refinement than diesel rivals. The IS 300h has a combined power output of 220bhp (its 2.5-litre four-cylinder petrol engine combined with its electric motor) driving the rear wheels.

Lexus says the packaging of the battery pack behind the rear axle and beneath the luggage compartment has helped achieve 50:50 weight distribution front to rear. But it also hasn’t harmed luggage space significantly. The 450 litres’ minimum is 30 litres short of the non-hybrid version, and substantially higher than the 378 litres available from its non-hybrid predecessor.

On the move there is the traditional Lexus hybrid refinement, even after the engine cuts in, and the chassis upgrades for the new model are evident in its more engaging feel for the driver.

F Sport models are available with the facility to make the car appear more sporty with a volume control for a simulated engine note played into the car, to give added enthusiasm to hard acceleration.

The F Sport also comes with a revised instrument design with a Lexus LFA-inspired layout and graphics.

However the 99g/km SE model is likely to tick more boxes for fleet operators and would be the only IS model to fall under any 100g/km limit on CO2 emissions that might be set.