Due on sale in September, the seven-seater Mazda5 is the only vehicle in its class to have double sliding rear doors which make it easier for passengers to get in and out. How very practical.

But Mazda believes the car’s appeal from the driving seat holds the key to winning sales.

Mazda Motors UK marketing director Jeremy Thomson said: ‘Around 150,000 vehicles of this type were bought last year and many of them were chosen by people whose needs tend to be governed by family considerations, even though research shows that around 50% of owners are empty-nesters.

‘This part of the market is ruled by products which are worthy but dull and we’ve tried to do something about it.

‘This car has been built to appeal to drivers who like the idea of owning a model which has a lot of useful space but who still enjoy their driving and want a vehicle which doesn’t handle like a bus.

‘We’re offering them a super drive in a car which doesn’t behave like an MPV on the road but has still been designed to be versatile.’

Development engineers claim it takes less than a minute for a driver to sense that the 5 – which shares many of its components with the Focus C-Max built by Ford, Mazda’s parent company – has ride and handling qualities which set new standards in the segment. 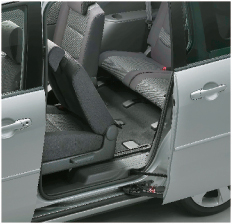 After putting preview examples of the car through their paces on a racing circuit in France, despite its size the Mazda does manage to combine the ride comfort of a traditional saloon with refined handling and sharp roadholding characteristics.

Thomson added: ‘While we haven’t lost sight of the fact that this car has to be practical, we wanted to add some of the zing which has made the Mazda6 such a strong contender. This design is so imaginative as well as being practical that it will come as a big surprise and stand apart from its rivals.’

A relatively low annual sales target of 4,000 units has been set for the model and only 35% of that is earmarked for the business sector.

Thomson said: ‘That’s a deliberately conservative figure. We’ve exceeded sales expectations in the past and my view is that we should do it again with this car. We have a ready supply and I’m confident sales will reach a higher level.’

As well as aiming to make the 5 good to drive, Mazda has also engineered the model to have flexible seating, with a total of seven seats available. The centre row of two seats can be converted into three by folding up the centre armrest.

All second and third row seats can be folded in a single movement without removing the headrests to create a flat load area of between 112 litres and 857 litres capacity. There are also 40 storage areas and 10 cupholders fitted.

Longer, taller and wider than its Focus C-MAX cousin, the 5 uses transversely-mounted Mazda 1.8 and 2.0-litre petrol engines with five-speed manual gearboxes and a pair of 2.0-litre common-rail diesel units.

Even though Ford suggested using the diesel engines it has jointly developed with PSA Peugeot Citroen, Mazda insisted its variable-geometry turbocharged engine was better suited to the 5’s heavier bodywork.

As a result, the diesel engine is available in two power levels, each with six-speed manual transmission and fitted with Mazda’s own maintenance-free particulate filter system which will soon be adopted by the facelifted Mazda6 line-up. All engines meet Euro IV emission standards.

Pricing of the range – the fifth new line to follow the launch of the Mazda6 three years ago – is still being finalised, but the firm’s UK subsidiary is likely to set a price tag of £14,650 for the entry-level TS version to make it a direct rival for the six-seat Honda FR-V.

The base model will be well specified and will come with ABS brakes, emergency brake assist and electronic brake force distribution, front and side airbags for the driver and front passenger and side and curtain airbags to protect occupants in all three seat rows. Air conditioning is also standard.

Climate control and roof bars will be included on TS2 and Sport versions, along with alloy wheels and CD player, while Sport versions will sit on bigger wheels and boast a multi-disc CD changer, rear spoiler and dark privacy glass on the side and rear windows.

DVD satellite navigation, an option likely to cost around £1,500, will also include a camera to assist rear parking manoeuvres.

DRIVING on a race circuit uncovers the parameters of a car’s roadholding abilities – and the new Mazda5 soon proved itself to have higher than average capabilities in our test.

Even though the electro-hydraulic power steering on petrol-driven versions feels a little vague, the car keeps to the predicted course through bends and it takes only an easing of the throttle to tuck the nose in neatly when it starts to run wide of the line.

Roll rates are surprisingly low for a tall vehicle of this type, and the Mazda remains tidy and composed even when it was taken through a slalom test.

With a lower floor level than its competitors such as the Renault Scenic and Volkswagen Touran, and the widest rear door openings in the sector, access to all the back seats is particularly easy.

Sliding doors have commercial vehicle connotations, but neat engineering allows them to be operated easily with one hand and their curved design allows them to blend in well with the wedge-shaped body styling.

THE acid test will come when the Mazda5 is available for assessment on ordinary roads, but from out initial drive the signs look good. This late entrant in the fast-growing mini-MPV sector feels comfortable and safe when pushed hard and seems likely to be a strong contender for user-chooser business.