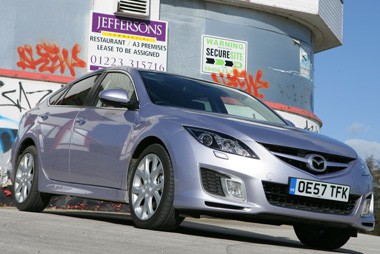 After a few quiet months of Mazda ownership, the arrival of summer presented the opportunity to finally subject the 6 to some serious testing.

The occasion was a road trip across England, France, Belgium and the Netherlands.

I have been more than happy with the 6 as an everyday runabout, but how would it cope as a grand tourer?

The trip started badly, as my touring partner and I overslept and had to make it to Dover in double-quick time.

We managed it, but just outside Dover picked up a puncture in the left rear tyre.

No matter, simply put the spare on. Boot open, carpet up – no spare. Not even a space-saver.

Instead, I was faced with a bottle, a tube and an air compressor.
According to the instructions, all I had to do was deflate the tyre completely, attach the tube and bottle to the valve and empty the white gloop into the tyre.

After pumping the tyre back up, the advice was to take the car for a quick spin to make sure centri-fugal force pushed the gunk around the inside of the tyre and sealed the hole.

This was duly done, but proved pretty ineffective. Air was still leaking out, albeit more slowly, but with no time to change tyres we decided to get on the ferry and try to sort things out in France.

At Dunkerque, we were faced with finding a fast-fit centre, pronto. We had an hour until everywhere shut, and we needed to be in Brussels by that evening.

Unfortunately, we had never been to Dunkerque before and my French is less than fluent.

Help came in the form of TrafficMaster, the satellite navigation package I installed before we left. We dropped them a line to see if they could help. They didn’t have a record of fast-fit centres
in Dunkerque but put me through to the RAC, who did. The sat-nav got us there with 30 minutes to spare.

The experience led me to question the decision – not just by Mazda, but across the industry –to dispense with spare tyres.

Had there been a wheel ready to go in the boot I could have changed it in minutes and not had to worry about a replacement until I returned to the UK. The gloop solution is no more than a stop-gap, and not a good one in this case.

Mazda says the decision was a weight-saving one, designed to reduce fuel consumption and emissions. A spokesman said the 6 comes with three years of roadside assistance should drivers need help.

Thankfully the rest of the trip went without a hitch.

The journey across three countries was managed on a single tank of fuel, and the 6 was comfortable and reliable throughout.
Save for a tyre, I couldn’t have asked for more.