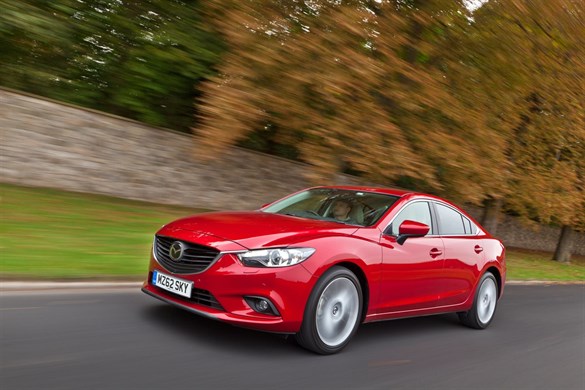 The Mazda6 is about to put the Japanese brand firmly on the map with fleets, just as the original car did more than 10 years ago.

But while its predecessor scored highly for style and value, the third-generation Mazda6 will also win over businesses and drivers from class leading low CO2 emissions.

With 108g/km from the entry-level diesel – the 150bhp 2.2-litre SE – the Mazda6 is on a par with the 109g/km Volkswagen Passat Bluemotion, a model modified from the rest of the Passat range to optimise fuel economy and low CO2 emissions.

This is great news for drivers seeking to reduce BIK liability because they can choose a low-CO2 car without compromising performance, while employers’ NIC is also set at a lower level.

The Mazda6 is the second model to be launched under the company’s Skyactiv banner, which focuses on key aspects of the car to improve efficiency: weight reduction in the structure of the car, engines and gearboxes as well as ensuring engines and transmissions are as efficient as possible.

What Skyactiv did for the Mazda CX-5 by giving it a class-leading position for fuel consumption and CO2 emissions in the crossover sector, it is now doing in the upper-medium sector.

The styling is also eye-catching. The production version of the Mazda6 seems to have evolved only slightly from the Takeri concept car of a year ago. Its sleek styling makes it stand out in a sector where many models look rather sober.

It’s a great car to drive, with smooth power delivery and plenty of pulling power low down. Maximum torque for the 150bhp diesel is 280lb-ft while the 175bhp version produces 309lb-ft.

Noise intrusion from the diesel engine is low, while the benefits of the Skyactiv construction makes the Mazda6 feel nimble on challenging roads, as well as provide excellent comfort on the motorway.

While the interior of the Mazda6 is rather plain in black, there has been a noticeable improvement in the quality of materials, and equipment levels are generous.

The most disappointing aspect of the new Mazda6, and it’s particularly disappointing, is the £2,200 price premium for diesel models over petrol.

Looking at the Volkswagen Passat, the premium of a 140bhp diesel over a 160bhp petrol is less than £1,200, although if choosing the 170bhp diesel it does increase to almost £2,200. But the Passat diesels are badged Bluemotion Technology and come with features such as stop/start and others to help reduce fuel consumption.

Stop/start (Mazda calls it i-Stop) and energy recuperation (i-Eloop), are fitted on both petrol and diesel Mazda6 models so it’s difficult to see where all that extra cost is.

When Fleet News spoke to senior executives at Mazda in 2010, they said Skyactiv diesel would be able to achieve Euro6 emissions standards without expensive exhaust after-treatment, and claimed the price premium for diesel should be maintained at the same levels. Instead Mazda has added £1,000 to the price.

While we appreciate wholelife costs are more relevant than list prices, high P11D values penalise drivers as well as organisations paying Class 1A National Insurance contributions. Ambiguity has been created and when comparing like for like, petrol models in the new Mazda6 range offer lower annual BIK payments and NIC than diesel models. Although it shows what a good job Mazda has done in reducing emissions with Skyactiv petrol engines, it’s disappointing because fleets will still invariably prefer diesel models as running costs will be lower overall for high-mileage drivers, and it gives the impression that Mazda hasn’t kept its word.