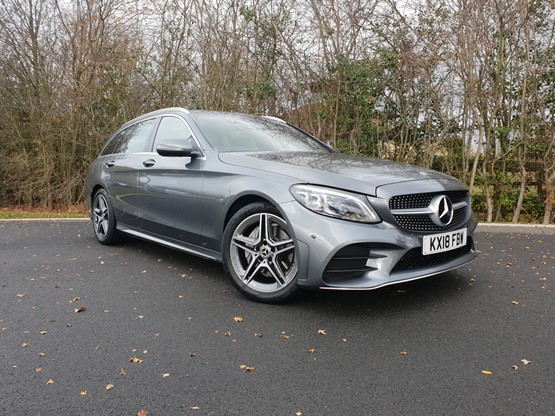 The past six months with the C-Class have flown by. The car has covered some long journeys including Paris, Devon and Wales as well as the regular day-to-day trips. They have been mostly of light duty with just one or two passengers and little or no cargo although the car has put in a stellar performance when put to the test as a holiday workhorse on occasions. It is worth pointing out that the rear seats are too small for three grown adults to sit comfortably on anything more than a short journey.

The Mercedes is universally liked for its premium look and feel partly due the AMG line styling although there have been minor niggles:

Fuel consumption isn’t great. A high of 42mpg has been achieved but a disappointing 35mpg is more realistic, although this petrol model is around £2,000 cheaper than its diesel counterpart.

The infotainment system proved a little laggy at times and the myiad ways to control the car’s many onboard functions felt a little unnecessary. The nine-speed autobox is smooth and responsive and, as such, the flappy paddle gear change is a little redundant and the keyless start but no keyless entry is a bit of a bugbear of mine.

Overall, if a premuim badge is a ‘must have’ then the C200 AMG line Estate is worth considering.

The Easter holiday and a 600-mile round trip to South Devon has provided a good test for the C-Class’s comfort and abilities beyond day-to-day.

Cruise control is a welcome addition for any long journey. However, the lack of adaptive cruise control on our model (part of the optional £1,695 Driving Assistance package) became tiresome during extended motorway driving.

Fuel economy was 43mpg on the trip computer compared with the usual 35mpg, which is in line with the WLTP figure for the car but less than we'd expect from a diesel model.

Using the Fleet News fuel cost calculator, we calculated that the 600-mile trip cost around £81. In a C 220 d, the same journey would cost £71, assuming the car achieved its WLTP-reported figure.

Fuel bills will therefore be higher overall, although drivers may not feel the pinch when travelling for business - even if they don't have a fuel card. Advisory fuel rates of 14ppm for the petrol C-Class means that drivers could reclaim £84 for the journey..

The C-Class is equipped with charging leads for popular devices such as Android, iPhone etc. The provided leads, however, are short and the USB sockets are built into the centre armrest which means charging while using the device is impossible and, while multiple device charging is possible, it can clutter the area in the way of the driver’s elbow.

The front seats, which include an adjustable leg support, are very comfortable. The rear seats, although comfortable, seem narrow. When occupied with just two children and a small travel dog carrier taking up the centre seat operating the seat belt buckles becomes very difficult due to lack of space, especially for small children.

Practicality is obviously a key consideration in an estate car and the C-Class Estate is pretty much on a par with its nearest rivals the Audi A4 Avant and the BMW 3 series Touring.

However less premium models like the Volkswagen Passat Estate offer much more space (650/1,780). 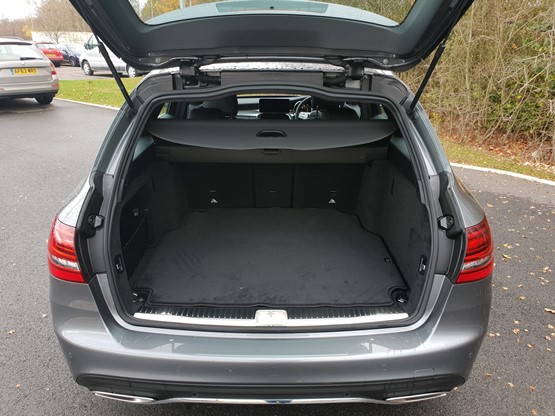 Practicality may be somewhat lacking on the Mercedes’ electronic tailgate, which lacks the auto open function on our test model.

The rear seats fold flat at the touch of a button and are split 40:20:40 which is handy for carrying two rear seat passengers and long loads which can pass through the centre of the rear seat.

The maximum braked towing weight is 1,800kg, however the torquier diesel engine maybe a better choice for those who need a regular tow car. A reversing camera is also included on our AMG Line trim level.

As the availability of in-car technology increases so does the possibility of driver distraction. The importance of clear and intuitive in-car systems has never been so important. The C-Class cockpit is full of tech, it has twin screens, one in the centre of the dashboard for the infotainment system and the other as a main dash display.

While the infotainment screen's main functions are navigation, phone and media connectivity, the main dash display can also display this information, in fact it is capable of showing the driver 14 separate bits of information at any one time from speed to journey information, maps to radio.

The display is customisable in myriad of ways whether you want a rev counter or navigation details or even a g-force monitor, it’s all there. 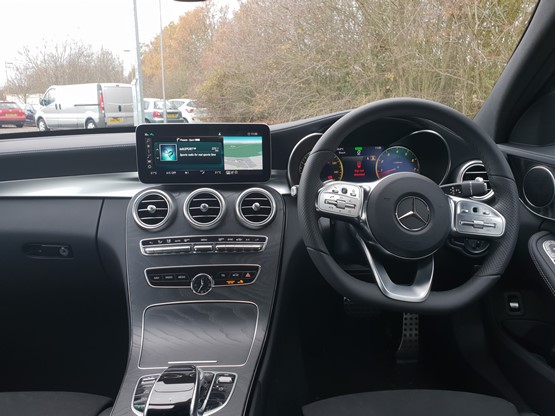 There are also many ways to control the many functions. In the centre console in place of the gear selector (the C-Class is a column shift) is a touchpad which, with the swipe of a finger can control the functions of the centre screen, underneath the touchpad is an i-drive-style dial which also controls the centre screen. The steering wheel has two miniature touch pads, one which controls the infotainment screen and one that swipes and toggles between the many possible displays on the main dash.

There are two volume controls, one on the steering wheel and one next to the touchpad (neither of which are easily accessible from the passenger seat). And finally, the left-hand stalk controls indicators, rear wiper, front wipers, window washers and high/low beam (the other stalk is the column shift remember).

Of course, you settle into your own way of controlling and displaying the information you need. However, the number of options could lead to unnecessary distraction especially in drivers new to the car.

Will smaller petrol engine be a suitable alternative to diesel? - January 2019

Diesel is still the predominant fuel for company car users. But, if our long term test fleet reflects changes in the fleet market, petrol is making some headway. Diesel has been king for so long the C200 is only the second petrol car I have driven in the past five years, the other being a 1.0L Vauxhall Corsa.

The Mercedes’s engine is a relatively small 1.5L with power at 184PS and torque 280Nm

Fuel economy for the petrol engine is lacking compared with a diesel equivalent, over the past two months and 2,790 miles I have averaged 36mpg (on a long motorway run this increases to 41mpg and around town drops to high 20s/low 30s).

The engine does a good job and power, thanks in no small part to the 48 volt ‘EQ Boost’ system, is plentiful.

I’ve yet to see any noticeable difference between eco and comfort mode, both have ample power. Sport mode which hangs onto each gear for longer can become a bit tiresome.

After some initial fiddling with driving modes early on the car now stays in its preset comfort setting which is probably all anyone needs anyway. I find driving modes in this type of car a bit gimmicky along with the paddle shift gear change and g-force monitor which seem unnecessary. I would gladly sacrifice these for keyless entry or a heated front windscreen which are both lacking on this model.

As we say goodbye to the Mercedes-Benz E220d we welcome its stable-mate, the C200 AMG line estate onto the Fleet News test fleet.

The C-Class is one of Mercedes-Benz’s biggest selling models in the UK, with the C220d being the most popular derivative among fleet customers.

Our test vehicle uses a 1.5-litre petrol engine with a nine-speed automatic transmission and a manufacturer-claimed 44.1mpg fuel consumption figure.

When accelerating, EQ Boost will assist the 184PS engine with an additional 14PS, bridging the moment until the turbocharger has built up its full charge pressure which reduces turbo lag.

This power boost is also used to help the engine reach its ideal revs as quickly as possible during gearshifts.

During deceleration, the car recuperates kinetic energy and uses it to recharge the battery.

To further help improve fuel economy, the engine will turn off in certain situations when you lift off the accelerator, allowing the car to coast.