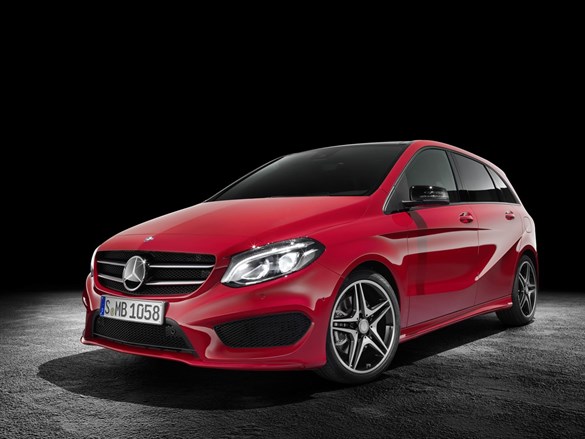 The most successful engine built by Mercedes-Benz has been enlisted to add fresh appeal to the company's line-up of compact sports utility car range.

Sized at 2.1-litres, the diesel motor found under the bonnets of cars ranging from the A-Class to S-Class and Vito and Sprinter vans is set to play a leading role in next-generation B-Class models.

Boasting significant improvements in efficiency over the current 1.8-litre engine, the ubiquitous turbo unit is expected to appeal to business drivers when the  revised cars reach the showrooms in December.

“The B-Class has freshened looks, improved convenience and uprated safety, but the new engine could prove to be a more likely reason for fleet motorists to consider moving to our brand because it now offers lower cost of ownership.

“However, we are also confident that a new facility allowing fleet vehicle managers to keep track of how the car is being used will also prove attractive to operators,” a spokesman told Fleet News when the range was launched to the media in Spain.

Called Mercedes connect me, the facility is based on a digital internet platform and works via a communications module fitted to every car in the next-generation B-Class line-up.

“While the availability of data on average vehicle speed and driving economy is not new, making it accessible from any location outside the car is a feature we feel will be of use to operators who wish to encourage driving efficiency.

“Like other systems, it automatically contacts a call centre in an emergency, manages breakdown assistance and allows the position of a moving vehicle to be pinpointed via GPS, although the driver is able to deactivate this part of the service at any time.

“But we think the ability to remotely retrieve data on how much fuel is in the tank and the range of the vehicle is useful, as is the facility allowing the vehicle to detect the need for parts replacement and report this to the service outlet as the basis for preparing a quote for the work that's needed,” said system product manager Georg Walthart.

Even though it develops no more power than the outgoing unit, the larger motor achieves greater flexibility by delivering its torque at lower engine speeds and an eight grammes reduction in emissions boosts economy from 67.3 to more than 70mpg. Noisy on idle, it settles down to a subdued hum to make for relaxing cruising.

Front and rear styling changes improve the looks of the car and a revised dashboard features clearer dials, a new three-spoke, multi-function steering wheel and a bigger, tablet-style centre screen that's easier to read. As before, tall bodywork provides raised seating to allow good all-round visibility and accommodation for for five adults and their luggage is generous in a versatile interior that boasts an adjustable rear bench with a ski hatch and a boot floor with varying height positions.

Leather trim, a high-grade sound system, a reversing camera and iPhone connectivity all come as standard on the SE, which also boasts an important upgrade in active safety with enhanced collision prevention equipment now including autonomous braking.

Unique in the segment, the feature flashes up a visual warning if the B-Class is driving too close to the vehicle in front. This is followed by an acoustic warning if sensors detect a risk of collision and bring the car to a halt if the driver fails to respond.

“No other competitor offers equipment as standard that allows rear-end collisions to be avoided entirely or the severity of the accident reduced significantly,” said development chief Dirk Streichert.