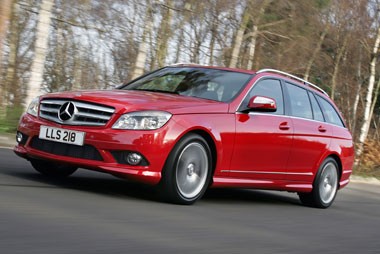 It’s amazing what a bodykit and a set of larger alloy wheels can do for a car.

Take the new Mercedes-Benz C-Class. In its standard form it’s a perfectly attractive car, but adding some select AMG bodystyling parts turns it into a far more noticeable and desirable model.

The AMG kit comes as standard when you upgrade to Sport trim and gives the C-Class much more in the way of visual clout, from the chunky six-spoke alloys to the deeper front and rear bumpers and prominent three-pointed star nestling in the front grille.

It looks the part, which is good news in a sector where drivers prefer their car to look sporty (think Audi S line and BMW
M Sport).

The subject of this test is the ultimate incarnation of the recently-launched C-Class estate (discounting the extreme C63 AMG).

The C320 CDI Sport tops the regular range and makes a convincing case as a desirable all-round car.

Outside is the aforementioned sports styling pack while under the bonnet is the common rail 3.0-litre turbodiesel V6 engine that also plies its trade in the larger E, CLK, S, R, ML and GL models.

So, as the smallest car to package this engine, it’s fair to assume that the C320 CDI isn’t short of power.

With 224bhp and 376lb-ft of torque, this engine delivers effortless performance through the standard-fit seven-speed automatic gearbox.

This performance is delivered with such smoothness that it would be hard to argue for the merits of the petrol C350 V6.

While the C320 is unmistakably a diesel at start-up, once you are on the move there is very little in the way of engine noise coming into the cabin – the only clue comes when you plant your foot on the accelerator and the car surges forward without hesitation, using all of that 376lb-ft of torque to gain speed.

The ride is very comfortable yet the handling is sharp and sure-footed.

It’s not at BMW levels of driver involvement, but is a million times better than the model it replaces.

The cabin architecture mirrors that of the saloon, which means much improved quality levels and features brushes of aluminium trim to lighten the predominantly black colour scheme.

As the C-Class has grown over its previous incarnation, this means more legroom for rear seat passengers, and also more room in the boot.

In fact, the new C-Class leads the way in luggage space, offering more room than the new Audi A4 Avant and BMW 3 Series Touring.

The Mercedes-Benz falls directly between its two premium German rivals, although the Audi featured comes with a six-speed manual gearbox. Once a Tiptronic version is added expect its price to roughly match that of the C-Class. All four are in top-of-the-range sport trim.

The three German models all offer variable service intervals determined by the car’s on-board computer. This means they will probably need one service less than the Chrysler, which has fixed 12,500-mile intervals. The 300C runs on large 20-inch alloy wheels which cost more to replace than the others’ 17-inch items.

Victory for the Audi, which blends a competitive front-end price with a strong residual value that CAP estimates at 41% of its cost new. The BMW achieves the same percentage, but its higher price tag counts against it. The C320 will return 42% and the Chrysler 39%.

Audi’s new A4 Avant wins on running costs. At a fraction under 52ppm it will cost a fleet £31,134 over three years/60,000 miles. The BMW is £400 more expensive, while the Mercedes-Benz costs a penny a mile more than the Audi. High SMR and fuel costs scupper the Chrysler.

The first to be discounted is the Chrysler – it simply costs too much money to run and costs a driver too much in terms of benefit-in-kind taxation. Which leaves the usual suspects.

Each model has its benefits – the Audi’s style, the BMW’s efficiency and driving dynamics and the Mercedes-Benz’s road presence, so choosing a winner is very subjective and different drivers will have different preferences.

However, the Audi A4 Avant is the cheapest to run, has a very competitive tax bill, looks great and offers strong performance. As an all-round package, that’s hard to beat.