I’M going to leap forward, if you don’t mind, to the comparison section of this road test because trying to find direct rivals for the Mercedes-Benz CLS is like searching for the Loch Ness monster, the abominable snowman and a Scotsman hoping England will win the World Cup. Futile. They just don’t exist.

For a start it looks like no other luxury saloon with its shallow arcing roof and long tapered boot.

I admit that when I first saw it at the Frankfurt Motor Show a few years ago it reminded me of some down-in-the-mouth, bottom-feeding fish. A gurnard perhaps. But I’ve come to love its unique looks, to the point that I’d happily put up with the compromises – or should that be idiosyncrasies – which go with them.

For a start, those sleek, half-moon side windows look great but combine their lack of vision with the bowed body and parking without the aid of sensors requires finely-honed spatial perception.

Also, for some reason there’s a disconcerting inch-wide gap between the chrome-trimmed doors and the B-pillar and the lack of headroom in the rear means passengers will not feel as lavished upon as those in the front.

There are only four seats in the CLS, with a big central armrest in the back making even a fifth person perched in the middle impossible. Having said that, the two rear seats are individually sculpted and very comfortable.

Ultimately, if you cannot reconcile yourself with the nuances of the CLS, just don’t buy one. It’s as simple as that. Buy a considerably more practical E-class instead. And it’s that uncompromising approach that makes the CLS such a wonderful car.

The CLS also gets a bespoke interior. This is not just a reskinned E-class. I especially like the large, deep console and wide wooden sweep across the dash.

The 3.2-litre V6 engine delivers everything you could want of an executive diesel.

It has a decent shove to it, allowing the occupants to escape all but the most determined proles, and it is very quiet and refined too, while the seven-speed gearbox is near-perfect. It is so smooth and precise that spotting the changes is nigh-on impossible.

And then it delivers near 40mpg on the motorway.

This is the place to take the CLS. It’s not an especially sporty car, with a soft-ish suspension and a wafty ride, but then racing along in this car is so undignified.

The CLS320 CDI only comes in one specification, and there is a very long list of extras which unsurprisingly means that the standard car is hardly weighed down with clever toys and fancy extras.

Part-leather seats which are electrically powered in the front, a single-slot CD player, cruise control, climate control and rain-sensing wipers are the highlights.

While plenty of other cars are better specified for the price, very few have the sense of virtuoso style of the CLS, and I’d take that every time over a CD autochanger.

Mercedes-Benz is really pushing this particular car at corporate customers with some very attractive leasing rates and it really isn’t hard to see why they have such grand plans for it.

Any executive without the acumen to place this wonderful vehicle on their new car shortlist really doesn’t deserve their place on the board. 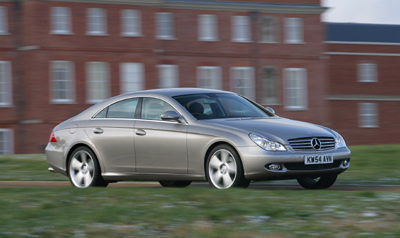