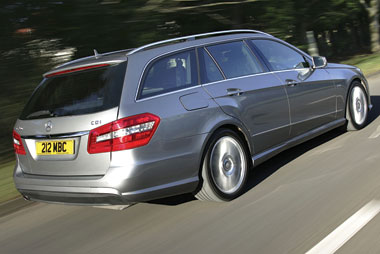 Mercedes-Benz has always taken a more traditional approach to estate cars than its German rivals.

For one thing, it actually calls them estates rather than names like Touring and Avant, which try to bring unnecessary excitement to what for fleets is the workhorse or family-car class.

And it has always been careful to design a really useful load capacity through its generous boot space.

That approach continues with the E-class estate. At 695 litres with the rear seats up (1,950 with them down), the car beats its BMW 5 Series and Audi A6 rivals by 135 and 130 litres respectively.

On the road the E250’s seats provide good comfort and support – perfect for the motorway.

Away from the mile-munching, the E-class estate handles competently on twistier roads: it’s no 5 Series, but neither is it the anodyne offering of the old version.

The middle ground means greater comfort and an effortless drive.

The car also puts in a strong showing on residual values and running costs, splitting its two German rivals.

The 37% RV over three years/60,000 miles for the SE is just a point behind the equivalent new 5 Series Touring, and nine ahead of the A6.

Quibbles include a lazy semi automatic gearbox which slouches through the gears and a poor fit around the fuel flap, which didn’t sit flush with the body on our test vehicle, but otherwise a very accomplished performer.