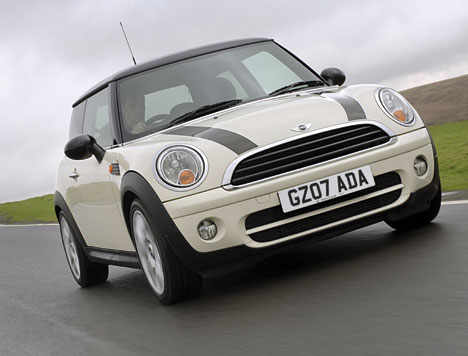 Incredible as it may seem, I had never driven a new MINI.

I have friends who fervently believe the original Issigonis design is the only true Mini, and I felt I’d be betraying them if I succumbed to the bubbly charms of the BMW-designed re-interpretation.

Well, that was part of the reason. The other was the previous new MINI model never had a sporty diesel model – instead relying on entry-level badging.

Until now. The introduction of the new, new Cooper D throws up potential concerns.

The MINI Cooper name is one of the most prestigious in motoring, conjuring up images of sporting prowess, performance and handling. Can a diesel engine really keep the essence of the Cooper moniker?

The diesel engine in question is a 1.6-litre unit producing 110bhp and 177lb-ft of torque, with an extra 15lb-ft available as an overboost function for quicker overtaking.

Such figures might not sound scintillating, but once in the car and driving around it feels much more dramatic.

The driver sits so low that the road really does feel right underneath you. The low-down torque – available from just 2,000rpm – whips you along and it doesn’t even sound like a diesel.

Handling, as one would expect, is fantastic. No corner is too much of a problem – it just holds on and displays monumental grip.

It may be a bold statement, but I’d rate the Cooper D as one of the most fun diesel cars I’ve ever driven. So, driving enthusiasts can rest easy – the magic of Cooper remains.

It’s good news for the fleet manager, too. The new engine emits 118g/km of CO2, putting the car into band B for Vehicle Excise Duty. Combined mpg is a claimed 64.2, and although I didn’t get near that, I did average well above 50mpg.

It drives well, it’s economical – could this be the perfect car? Well, I do have a few niggles. The central speedometer is ridiculously oversized and I would much prefer it in front of me.

While the firm ride is great for bumbling along B-roads, those who prefer their cars to waft could find it a tad firm. There isn’t much room in the boot either.

My major gripe, however, is the amount of standard equipment, or lack of it.

The basic price of the car we tested was £14,175, but by the time we’d added rudimentary options such as air conditioning, height adjustment for the passenger seat, floor mats and a leather steering wheel, the price was up to £16,530. If you want more than the absolute basics, you’ll have to pay for them.

But nevertheless the Cooper D is a great little car and, with CAP estimating it will retain 51% of its cost new after three years and 60,000 miles it will appeal to both the head and the heart.