Mitsubishi is currently bucking the downward trend in the car market. Sales are up 14% across its car and commercial division, and part of this is undoubtedly attributable to new models the Colt supermini and the strength of its 4x4 models such as the Shogun and L200 pick-up.

The promise of a more comprehensive car and commercial range over the next few years ensures Mitsubishi’s current 40,000 sales a year are certain to grow further. Yet despite some healthy fleet business, particularly among specialist operators, Mitsubishi UK managing director Jim Tyrrell states: ‘Mitsubishi doesn’t do fleet sales.’

But the new Mitsubishi Grandis DI-D diesel may just change that. Introduced in July last year, the Grandis won praise for its striking style and versatile interior. But with its 2.4-litre petrol engine and automatic transmission its appeal was always going to be rather limited.

However, by raiding the parts bin of Volkswagen, Mitsubishi has procured a 134bhp, 2.0-litre turbodiesel engine for its smart seven-seat people carrier. 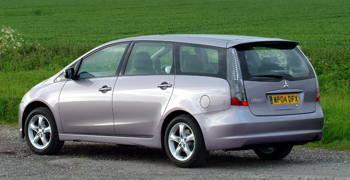 That’s certain to ensure a massive growth in sales, as diesel power currently accounts for 85% of full-sized MPV sales in the UK.

As a result, Mitsubishi expects to sell 4,000 Grandis DI-D models in its first year – alongside the 700 or so existing petrol sales.

Residual values are predicted to better the petrol model, with the DI-D versions expected to retain around 39% after three years/60,000 miles, compared with between 33% and 35% for the 2.4i models.

And that’s likely to be of interest to fleet buyers. Andy Wertheim, manager, fleet and used sales, suggests the Grandis will be Mitsubishi’s second-biggest fleet seller behind the L200.

That’s hardly surprising as it offers a smart alternative to the full-sized MPV competition with its seven-seat potential (the two rearmost seats can be folded down into the boot floor to create a large boot area), is Euro IV- compliant, offers 42.8mpg official combined economy, CO2 emissions of 176g/km, putting it into the 22% company car tax band and has performance to better diesel rivals such as the Ford Galaxy, Peugeot 807 and Toyota’s Avensis Verso.

Four trim levels will be offered from its September launch, with prices starting at £19,699 on-the-road.

Mitsubishi has not just added a diesel engine to the Grandis, but has also taken the opportunity to fine-tune its dynamics. Revised steering and suspension settings improve response in a bid to appeal to more enthusiastic drivers, despite its MPV status.

On the road, the changes have been reasonably effective. The steering is sharp, though still rather devoid of feel, and the six-speed manual transmission isn’t the slickest either.

However, the ride is good on both motorways and backroads – it is not ‘sporty’ as Mitsubishi suggests – but overall it is one of the better driving choices among the large MPV fraternity.

The 2.0-litre 134bhp engine delivers good performance, with a 0-62mph time of just 10.8 seconds and a potential top speed of 121mph. That gives the Grandis the power to compete with all-comers in its class.

Emissions are impressive too at 176g/km, while the official combined economy figure of 42.8mpg is also highly competitive. Unsurprisingly, the way the diesel performs is rather familiar to anyone who has experienced Volkswagen’s turbodiesels. That means a rather peaky power delivery – for a diesel it thrives on revs and its power comes in rather abruptly. It is also quite vocal under power, Mitsubishi not quite managing to deaden out sound as effectively as Volkswagen does. It quietens down at cruising speeds though, where the Grandis excels.

The interior is versatile with its variable seating for seven proving simple to use. Space is ample, too. However, the look and feel of the trim lacks the quality feel of rivals like Toyota’s Avensis Verso. You are compensated for this with excellent standard equipment – even the entry-level Classic model comes with alloy wheels, climate control, leather steering wheel, trip computer and front, side and curtain airbags.

Now able to boast a competent all-rounder in the MPV class, the Mitsubishi impresses. Plentiful equipment, smart styling, an easy drive allied to a three-year unlimited mileage warranty ensures the Grandis DI-D is worth a look, even if interior quality and refinement could be improved upon. 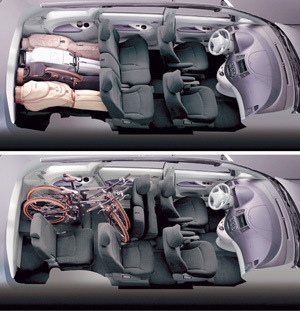