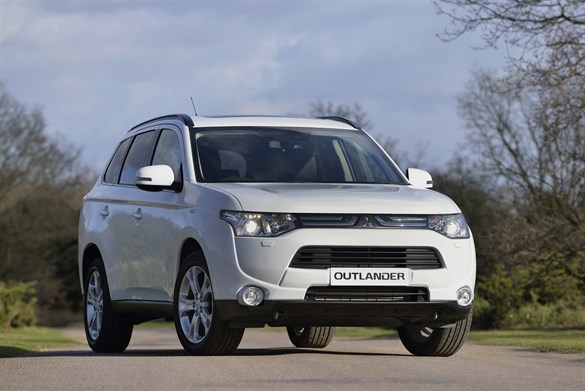 Last year was tough for Mitsubishi. Continued difficulties with the yen/sterling exchange rate hurt its UK operation and with no new products launched, the brand had very little to shout about.

This year will be a different story with the launch of the all-new Outlander later this month and the Mirage in the summer.

The new Outlander, which Mitsubishi says counts the Toyota RAV4, Hyundai Sante Fe and Honda CR-V as its key rivals, offers much reduced CO2 emissions and fuel consumption. This is due in part to the high priority Mitsubishi’s engineers gave to weight reduction during the design process, which sees the new model shed more than 100kg compared to the current model.

Combined with the introduction of a new, cleaner, 2.2-litre diesel engine, the Outlander offers CO2 emissions from 138g/km in its 2.2 Di-D manual four-wheel drive variant.

The Outlander on test, the GX5 Auto, has an impressive combined fuel consumption figure of 48.7mpg and some solid performance figures, too, with a top speed of 125mph and a 0-62 time of 10.2 seconds.

The new six-speed automatic gearbox seemed a little slow to react, but the car cruises well and engine noise is well suppressed. Given the lower emission figures, the manual would be a better fleet bet.

The Outlander feels quite nimble when cornering and is a fairly responsive drive for an SUV. It has lost some of the aggressive looks of its predecessor, but it’s a larger car and is a more capable seven-seater than before

The interior looks and feels a little more upmarket: the entertainment system includes a HD screen with sat-nav and reversing camera, the materials are improved and a full postcode search on the sat-nav is available on an Outlander for the first time. 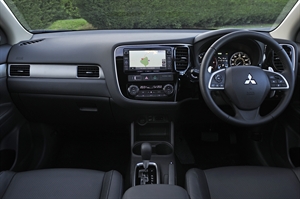 It also comes with an new technology throughout the range including Eco drive display, lane departure warning system and adaptive cruise control.

Four-wheel drive comes in three different modes and there is a 2,000kg towing capacity on offer, ensuring it competes well with rivals.

Prices start from £23,699 for the 2.2 GX2 Manual rising to £33,999 for the range-topping GX5 Auto. One in five sales are expected to be for the GX5 while the GX4 is predicted to be the biggest seller with half of overall sales.

The plug-in electric version of the Outlander will arrive in June with headline figures of 44g/km CO2 and a battery range of 32.5 miles. Prices are estimated to be around £40,000 after the Government’s £5,000 plug-in grant.

It has been on sale in Japan since last month and early sales have exceeded expectations. Mitsubishi bosses are calling the model a ‘game changer’, so it will be interesting to see if UK fleets are just as keen.