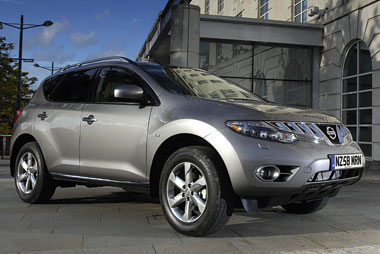 The Nissan Murano was conceived for the North American market, so wasn’t engineered with diesel in mind.

Cue the second-generation Murano in 2008. Still with a petrol engine, but diesel would come.

However, as the Murano was a development of the earlier platform, Nissan’s new V6 diesel wouldn’t slot into the engine bay without some major re-engineering.

So us Europeans would be getting a four-cylinder diesel version and, rather than source new Renault-Nissan Alliance technology, the engine used was a spruced-up version of the 2.5 dCi found in the Navara and Pathfinder.

One of the key features of the original petrol Murano was its refinement, thanks in part to its smooth V6 and a CVT auto gearbox.

Luckily the latest 190bhp version of the 2.5 dCi has improved refinement, and in the new diesel Murano is mated to a six-speed automatic gearbox.

It isn’t good news for CO2 emissions and fuel consumption, however.

Emissions of 210g/km and economy of 35.3mpg might be superior to the petrol version, but fall behind diesel rivals such as the Volkswagen Touareg and BMW X5, both of which achieve 195g/km using conventional auto gearboxes and more powerful six-cylinder engines.

On the positive side the Murano retains its distinctive looks (although the front is a tad heavy-handed since the 2008 model change) and high levels of equipment, including leather, electrically adjustable front seats and satellite navigation.

Although the Murano doesn’t stack up so well on costs, it has plenty of character and is loaded with kit that would be costly options on many rivals.