NISSAN is all set to introduce a series of mould-breaking models in a bid to win vital extra fleet business in Britain.

The process has started with the Note, a ‘different’ mini-MPV that has been designed to compete with rivals from both the supermini and compact car sectors.

It will be boosted at the end of next year by a replacement for the Primera that should prove equally viable as an alternative to the Ford Mondeo and Vauxhall Vectra, according to Nissan UK marketing director Justin Elias.

He said: ‘The Note challenges traditional perspectives by straddling both the small car and lower-medium segments and is also the first of a series of breakthrough models. The replacement for the Primera will continue in the same vein.’

In an exclusive interview at the launch of UK versions of the Note, Elias told Fleet NewsNet other new Nissans would be regarded as offering a change from traditional model structures because their designs will feature innovative packaging solutions to create greater interior space and versatility.

He said: ‘The idea is for Nissan to be no longer perceived as a ‘me too’ brand and for our cars to stand out from the crowd. The final decision on how the replacement Primera will look will be made at the end of this year – and because the UK is Nissan’s biggest market in Europe, we will have a big influence on what happens.

‘I’m not at liberty to say whether the replacement will be based on the platform for the Renault Megane or the new Laguna, but it will certainly represent another breakthrough in design.’

The arrival of the Note signals the end of the road for the Almera Tino MPV and Elias hopes a total of 15,000 examples of the new car will be registered this year – 25% of them with fleet customers.

He said: ‘Motability represents a considerable opportunity with this car, but the fact that it has such potential as family transport means we will also work hard to get it on to the user-chooser lists.

‘Early indications have been very encouraging. Since petrol versions went on sale last month, registrations have topped 2,500 – well ahead of what we had planned. Acceptance has been better than we expected and it’s clear this car is already regarded as a segment-buster. I think this shows people will like the new kind of Nissan we want to create.

‘We were disappointed at the uptake of the current Primera and last year’s sales of 44,000 units was around half the total it achieved when it was launched four years ago.

‘Now we’re all set to challenge conventional wisdom with a raft of new and exciting proposals for its replacement – but I accept that it will take time to turn things around.’ 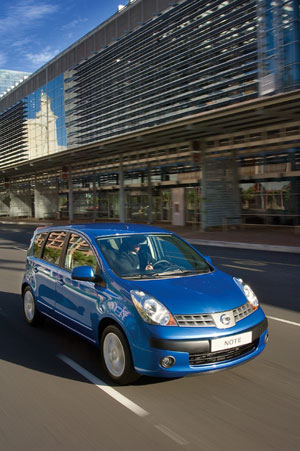 NISSAN is right to regard its smallest-powered Note as being the likely most popular choice. Despite having only 1.4 litres to power bodywork that’s big enough to swallow five adults and a surprising amount of luggage, this is nippy transport – and twirling it through congested streets couldn’t be easier thanks to an electric power steering system that makes maximum assistance available at low speeds. 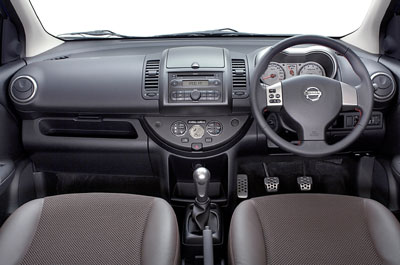 The little engine is a lusty performer, eager to spin to more than 6,000rpm. Mated with a light clutch and a slick five-speed gearbox, it feels eager in press-on conditions, but the noise it makes when extended could become tiresome over long distances at higher speeds.

Better options for more serious motoring are the 1.6-litre petrol, which has a potent feel and is well muted, and the familiar Renault 1.5-litre dCi turbodiesel, which offers the best blend of performance and economy and also feels relaxed in motorway progress.

Built in Sunderland, the Note shares many of its underbody components with the Micra. These include the suspension, which has been made stiffer to compensate for heavier loads. It works well for roadholding, but the ride can be harsh and jiggly over less than perfect surfaces.

IN any guise, the Note is Nissan’s most practical design so far, with lots of novel ideas to make the most of the cabin space that its long wheelbase provides. All versions have a sliding rear seat for maximum loading versatility and fit and finish is excellent. 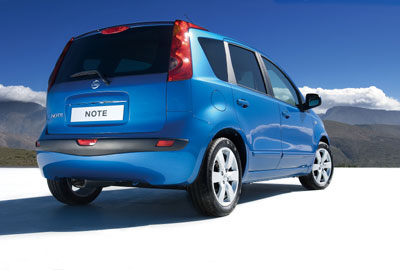 Figures in brackets for automatic models