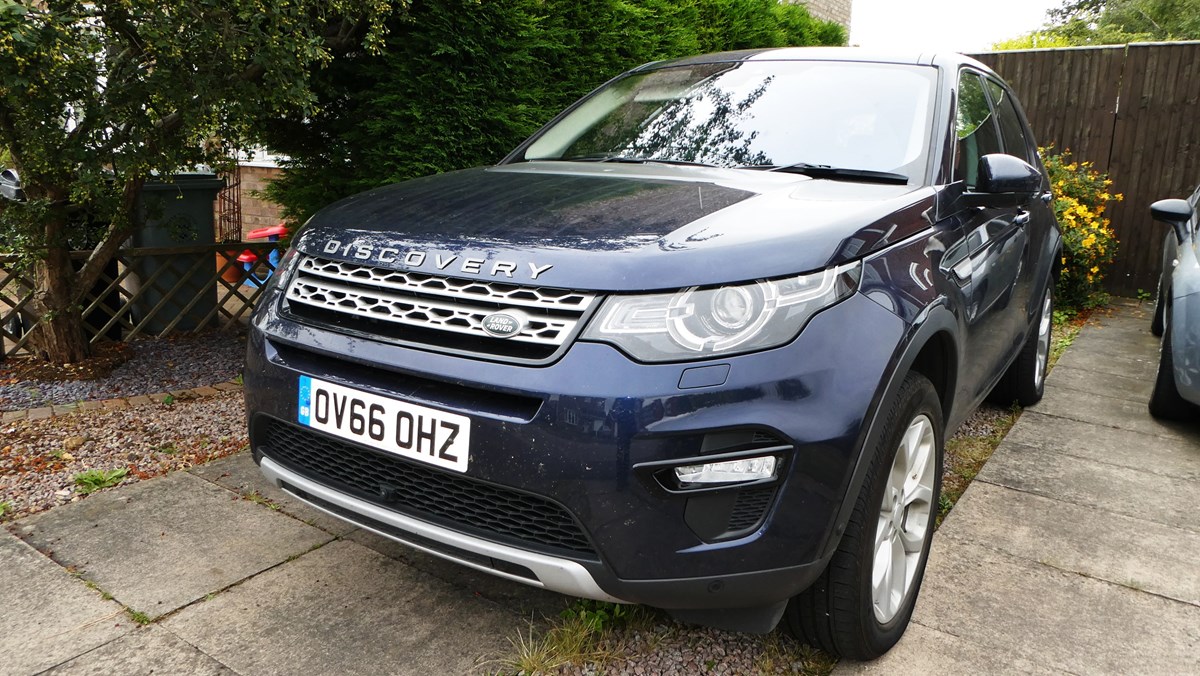 We’ve greatly enjoyed our time with the Discovery Sport. It is a competitive – make that compelling – model in the SUV sector, which combines comfort, a quality interior and excellent on-road manners with outstanding off-road capabilities.

Its main audience in fleet will be user-choosers and they will receive a car with ‘go-anywhere’ navigation, from muddy traverses to snow and ice. And every journey will take place in supreme comfort, with a cushioning driver seat offering excellent lumbar and side support.

Many buyers are new to the brand. From a fleet perspective, the appeal of adding it to the choice list includes a competitive running cost.

The past six months have been largely fault-free. The only cost was to refill the AdBlue.

We’ve lived with the intermittent screen judder although a simple software fix would resolve this – no doubt Land Rover will soon sort it.

Negatives – there aren’t many. However, a potential biggie is the electronically-operated boot lid. It has a lack of sensors to prevent it hitting something when you push the key fob to open. Several times, I have hit the boot release by mistake (it sits just below the door unlock) and hurriedly had to press the button again to leave it poised disturbingly close to a garage door or concrete post. Fortunately, we have stayed prang-free, though.

So, our conclusion: anyone in the market for an upper-sized SUV should consider the Discovery Sport. It’s a real contender.

We managed to nudge 9,000 miles before the Discovery Sport’s diesel exhaust fluid light flashed on, warning that a top-up of AdBlue was required within the next 1,500 miles.

That’s an impressive distance – most of our test cars seem to reach 5,000 miles or so – even more so when you consider Land Rover’s official expectations in the handbook. It predicts an average distance of 5,400-6,050 miles from the 13.7-litre tank, using one litre every 500 miles; we used one litre every 766 miles.

So the options: go to dealer – recommended cost of £29.99; buy 1.5-litre spill-proof containers, which screw into the filler spout, for £10 apiece; or buy a 10-litre container with a basic funnel for £20.

Actually, we found a fourth option: borrow the remainder of a colleague’s AdBlue, some five litres. While that has only filled the tank to around 60% (taking the three-litre reserve into account), that should be good for a few thousand more miles.

Unlike some of the other cars we’ve tested, which have the AdBlue filler next to the fuel cap or in the boot, the Discovery Sport’s is positioned under the bonnet, next to the bulkhead. Access is straightforward and resulted in no spillages.

At £2 per litre, AdBlue increases costs by £156 over a 60,000-mile lifecycle based on our experience. Worth knowing for budgeting, although these savings can be more than off-set by some frugal driving.

On previous tests, we’ve always been conscious the mpg figure shown by the trip computer is usually well short of the actual fuel consumed.

So how does our Discovery Sport fare? Over a 237-mile journey, measuring brim-to-brim, pretty well is the answer. The trip computer’s 41.7mpg claim was only 2.5mpg higher than the real 39.2mpg figure.

Of course, while it is reassuring that the technology Land Rover uses to measure fuel consumption is reasonably accurate, it still leaves us trailing in the wake of the NEDC official figure of 57.7mpg.

However, our real-world calculation, provided by Equa Index, is 39.5mpg – so we’re bang on that.

The Discovery Sport is an outstanding family car, capable of accommodating five with ample leg and headroom for all, plus generous boot space for luggage. The ride can be a little lumpy on undulating roads, with the suspension taking a moment to settle, but the chassis does quash most of the pits.

The interior is quality throughout, while the centrepiece eight-inch touchscreen has excellent graphics and is logical to use. Quick access buttons ensure the key functions – sat-nav, radio, car settings, air-con, etc. - are within reach at all times.

The navigation can take a few moments to warm up from a cold-start, and displays an annoying circulating symbol to, presumably, encourage patience. It doesn’t.

If you can live with the sluggish software, and I can, the infotainment system is excellent. The sat-nav itself offers one of the most precise journey time predictions of any car I’ve tested, with congestion often accurate to within metres.

For once, you really can plan your journey with complete confidence.

We have re-set the trip computer on our Discovery Sport to reassess the efficiency performance on a longer journey, rather than our usual ‘from-cold’ stop-start 17-mile commute to the Fleet News office.

The car had been averaging around 39mpg according to the trip – bang on the real-world efficiency figure from Equa Index (see Fleet Tools on the fleetnews.co.uk website for more). Since the reset, a journey to Leeds just topped 48mpg, on paper a reasonable performance although some way off the official 57.7mpg.

The next step is to check the actual fuel used rather than relying on the trip computer’s claims which we’ve found to be frequently out by 10-15% on other cars. As we have been generally covering up to 440 miles on the Discovery Sport’s rather meagre 54-litre tank, equivalent to 37mpg, we suspect we’ll need to knock a couple of points off our new high.

The Discovery Sport is a comfortable cruiser on the motorway, with supportive 10x10 power memory seats and an ease of driving which doesn’t result in undue tiredness.

Gear changes are smooth, steering is light and the chassis is accommodating on the bumpier sections of road, with surprisingly little road noise intrusion from the 18-inch alloy wheels.

It’s interesting to note a couple     of like-for-like improvements compared to our previous XE long-termer.

First, the auto-release electronic handbrake releases far more willingly in the Discovery Sport; second, the multi-media touchscreen is much more responsive. It does not have to be jabbed at repeatedly to change a radio station, for example.

However, one issue we’ve encountered is an intermittent judder with the display screen; it’s not consistent – or annoying – enough to warrant a trip to the local dealer just yet, although when it does suffer a bout of the shakes, it can become a little off-putting.

There is no shortage of options when it comes to large SUVs. When deliberating this category for the Fleet News Awards, the judges had to select a winner from 25 models offered by 15 manufacturers.

The Discovery Sport comfortably made the final six, although it was edged off the top spot by stablemate Jaguar’s F-Pace. The reasons are perhaps as much personal taste as any shortcomings on the Land Rover’s part.

Arguably, the Discovery Sport is a head rather than heart buy, occupying the more functional end of the SUV spectrum in contrast to the F-Pace at the sporty and luxurious end.

That’s not to say the Discovery Sport doesn’t offer drivers a refined experience and a high quality cockpit – it does. The ride is controlled and comfortable while the steering is accurate. Grip is outstanding despite the body roll, while we know from previous experience that the off-road performance is exceptional.

The high quality grained leather interior is set off by chrome accents on the steering wheel and bordering the central dash controls, dropping from the eight-inch touchscreen to surround the gearstick. It’s an airy and well laid out environment.

But where Discovery Sport has an upright, squared styling that suggests ruggedness and robustness, the F-Pace features sharp lines which point to a sporty pedigree. The Land Rover doesn’t tug at the heart-strings in quite the same way.

Our car has the entry-level 150PS 2.0-litre Ingenium diesel engine which gets a bit breathless when pushed hard but is generally a willing companion. Available only with six-speed manual, a decent gearbox, it is the most efficient model in the line-up.

However, against an official combined figure of 57.7mpg we are currently averaging 39.2mpg, albeit primarily on the daily commute – 32% off the pace. We’ll re-set for our next long journey to see how far into the 40s we can get.

Our timing for delivery of the Land Rover Discovery Sport couldn’t have been better, as the country entered the coldest snap of winter last month.

However, for the Disco, UK winters are a piffling matter, barely worth engaging any of the technical brilliance that underpins the SUV.

Fleet News first tested this car on the media launch in Iceland. There, the minus temperatures, snow-laden backroads and icy streets made for genuine 4x4 winter driving conditions. Yet, the Discovery Sport remained unruffled throughout.

Our test car is the 2.0-litre 150PS TD4 HSE e-Capability. The ‘e’ stands for economy, denoting the most efficient model in the range. It comes with six-speed manual transmission and five seats (rather than seven available on other models).

Initial impressions are favourable: for a big SUV it’s surprisingly assured and, despite a fair amount of roll on cornering, never feels unsettled.

With CO2 emissions of 129g/km, Discovery Sports leased before April 2018 qualify for 100% of the monthly payment to be written down against tax. After then, only 85% can be written down as the threshold falls from 130g/km to 110g/km.