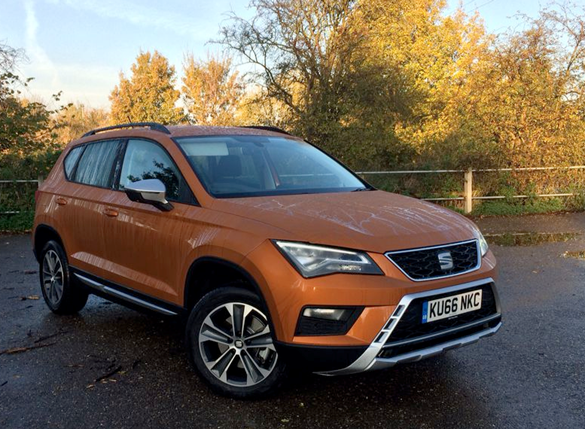 The Ateca has quickly established itself as a fleet favourite and, after putting it through its paces over the past six months, it is easy to see why.

It features in a model-line-up which includes both two-wheel and all-wheel drive versions, and a choice of two petrol turbo and three turbodiesel engines across a power range of 115PS to 190PS.

According to engine, fleets can also choose between six-speed manual and an automatic transmission.

Our test car has emissions of 113g/km, giving it a benefit-in-kind (BIK) tax band of 24%, and a claimed combined fuel economy of 65.7mpg. However, real-world fuel economy has struggled to get beyond 50mpg.

Company car drivers would probably do better opting for the larger diesel engine if they want to ensure a better balance between power and fuel economy.

But whatever they choose, they will get a car which feels surprisingly agile given its size and is great fun to drive. The ride is firm and it feels relatively balanced when cornering.

It is also a very safe car to drive. Advanced safety systems are fitted as standard, such as autonomous emergency braking (AEB), which helped the manufacturer achieve five stars in Euro NCAP crash-testing.

It was also crowned the best mid-size SUV at this year’s Fleet News Awards and has helped Seat grow its true fleet sales by 86% in Q1 compared to the first three months of last year.

Seat may have been late to the SUV party, but the Ateca was definitely worth the wait and looks set to continue to help drive the manufacturer’s fleet registrations in the future.

The Ateca has quickly established itself as a fleet favourite thanks to a low P11D, good residuals and great safety credentials.

It features in a model-line-up which includes both two-wheel and all-wheel drive versions, and a choice of two petrol turbo and three turbodiesel engines across a power range of 115PS to 190PS. According to engine, fleets can also choose between six-speed manual and an automatic transmission.

Our test car has emissions of 113g/km and a claimed combined economy of 65.7mpg. Even the more powerful 2.0-litre TDi 150PS four-wheel-drive Xcellence manual has official figures of 55.4mpg and emits just 129g/km of CO2.

After clocking up several thousand miles in our test car, the claimed combined of 65.7mpg has been difficult to reach with 44mpg currently achieved through a mix of motorway and urban driving.

Drivers should perhaps opt for the larger diesel engine if they want to ensure a better balance between power and fuel economy. But, whatever they choose, they will get  a car which feels surprisingly agile given its size and is fun to drive.

It is also a very safe car. Underlining its running cost credentials, the Ateca has received the highest score in the Euro NCAP test programme.

The first SUV in the history of the Spanish brand was given five stars. It received an excellent classification in each of the categories included in the Euro NCAP tests.

Advanced safety systems are fitted as standard, such as autonomous emergency braking (AEB). It is    also equipped with seven airbags, including one for the driver’s knees, as well as seatbelts with load limiter and pretensioner in the front and rear seats.

Enhanced safety systems such as Autonomous Emergency Braking (AEB) are becoming more popular, with many manufacturers offering them as an optional fitment.

Using radar and laser-based sensors to monitor traffic conditions ahead and automatically brake the car if a driver fails to respond to an emergency situation, AEB has proved its worth on previous test cars.

Research has also shown that vehicles fitted with AEB are capable of reducing the likelihood of front to rear crashes by up to 40%.

It is therefore heartening to see that Seat has made AEB standard on the Ateca – the first of the brand’s models to have it fitted as standard across the range.

It helped the manufacturer achieve five stars in Euro NCAP crash-testing, which is an excellent result. Specific ratings included 93% for adult protection and 84% for child occupant protection, only falling to 71% for pedestrian protection.

In AEB tests replicating urban driving conditions, the Ateca avoided collision at up to 30mph, the highest speed tested for this type of system.

In fact, the Ateca has a number of supplementary systems fitted either as standard or available as options.

Seat may be late to the SUV party, but thanks to the Ateca’s keen pricing it looks set to make an impression with the fleet sector.

That’s even more impressive when you consider that underneath its sharp exterior is, essentially, the much pricier Volkswagen Tiguan.

No surprise then that the Ateca has become the best performing Seat model in its history for a residual value (RV) forecast from pricing experts Cap HPI. The 1.0 TSI S, for example, is set to retain an impressive 59% after three years/30,000 miles, while our version on test – the 1.6 TDi Ecomotive – offers a 30% return after four years/80,000 miles.

The 1.6-litre variant will give fleets flexibility for a mix of town and motorway miles. But, after travelling up and down the M6 ahead of Christmas, the 115PS and 250Nm available underneath my right foot left me a little underwhelmed, and wondering whether the 2.0-litre variant would be the better choice.

Fuel economy on our test version shows a 22% shortfall against the claimed combined (51.2mph versus 65.7mpg), some of which will be down to trying to squeeze a bit more power out of the 1.6-litre diesel engine.

A lighter right foot would certainly achieve a better return or, again, the 2.0-litre diesel variant could offer the better balance in terms of power and economy.

What has really impressed, however, is the ride and handling of the Ateca. Body roll when cornering is minimal thanks to Seat getting just about the right level of firmness with the SUV’s suspension.

The steering is precise and the car feels quite agile despite its size, making the Ateca a lot of fun to drive. With emissions starting from 113g/km, it is another reason for company car drivers, and fleets, to consider the Ateca above some of its rivals.

The Ateca is set to be a significant car for Seat with hundreds of fleet and retail orders being made even before the car could be driven.

Seat is targeting 3-4% share of the SUV sector, the third largest and fastest growing segment in fleet, making the Ateca its second-best seller behind the Leon. It has also introduced a four-day test drive to encourage as many fleets as possible to the brand.

Available with either 1.0-litre or 1.4-litre petrol engines and 1.6-litre or 2.0-litre diesels (the latter offered with the option of four-wheel drive) our test vehicle is the 1.6 litre TDI ecomotive six-speed manual.

The Ateca scores a full five stars for safety from Euro NCAP, gaining protection scores of 93% (adult), 84% (child) and 71% (pedestrian) thanks to its Front Assist, City Emergency Braking and Pedestrian Protection technology. It has hillhold control and tiredness recognition as standard on the SE trim level.

Slightly longer and taller than the Leon ST, the Ateca has a  spacious cabin and also one of the largest load areas in its class (510 -1,604 litres).

The Ateca’s exterior styling is influenced by the Leon and the interior also has more than just a passing resemblance, there is no denying the SUV’s bloodline.