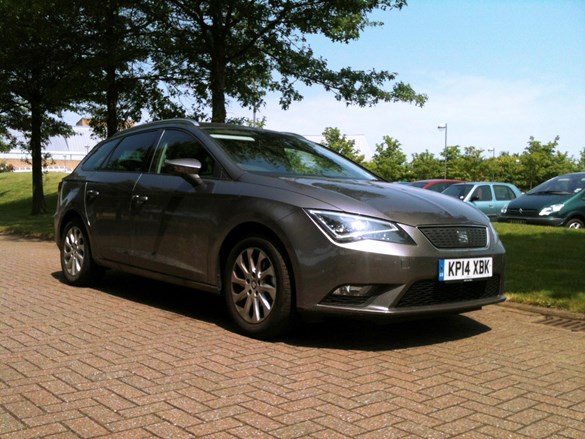 I have had the pleasure of driving the Leon since January – and it has been that, a pleasure.

Ok, so the mucky grey/brown colour our test vehicle was specified in isn’t particularly exciting. But look beyond the paint job and the Leon isn’t bad looking – even in estate form – with the LED headlight signature being particularly striking when you spot the car in a shop window. Our model may well be an Ecomotive edition with a claimed economy of 85.6mpg, but neither myself nor colleague Luke Neal, who looked after the Leon for the first six months of its time with us, have managed to get anywhere close – which is probably to be expected.

To be fair, the 60mpg we’ve been achieving on good runs still isn’t bad. The 110hp 1.6-litre engine under the bonnet has performed well, being more than suitable for everyday use, be that motorway or city. CO2 emissions of 87g/km and a BIK banding of 16% are also sure to please drivers.

Those eco tweaks responsible for shaving  12g/km off the standard model include a retuned engine, closed front grille, low rolling resistance tyres and the odd bit of aerodynamic trim here and there.

Alloys are still included, and they’re the same as a standard SE model, so unlike when these ‘eco models’ were first introduced, the vehicle doesn’t scream eco at you – which some drivers may prefer.

The improved fuel economy and reduced tax liability mean that, despite the small P11D premium, both driver and business have  something to gain by choosing Ecomotive.

Niggles were few and far between, but both Luke and I expressed a view that the seats could do with a little more padding – they’re flat and fairly basic and, while adequate for most journeys, they aren’t the best on longer trips.