THERE is a danger that the clunkily-named Peugeot 207 GT THP 150 will soon become overlooked.

Why? Because in two months’ time its place at the top of the 207 tree will be taken by the GTi THP 175 – a proper hot-hatch GTI to challenge the likes of the Clio Renaultsport 197 and Vauxhall Corsa VXR.

But for now the THP (turbo high pressure) 150 is the hottest 207 on offer, delivering as its name suggests 150bhp from a turbocharged 1.6-litre engine which also finds a home under the bonnet of the MINI Cooper.

Despite the 207 having grown in size and weight over the 206 it replaces, 150bhp is still enough to make the GT a fun drive.

It’s not blisteringly quick but the engine is willing enough to rev round to the red line and the ride and handling are on the firm side to make it feel like a sporty car.

Unfortunately, the gearbox and steering don’t benefit from this ‘sporting-up’. The steering is too light and over-assisted at all speeds while the gearbox has that vague action which is common to all Peugeots.

And while on the subject of the gearbox, this car is crying out for an extra ratio. At motorway speeds the car revs too highly, making it hard work on longer trips.

This also impacts on fuel economy and Peugeot’s claimed average of 40.3mpg will be very hard to match.

But away from the motorway the 207 is fun to drive, with enough power and chassis balance to make it good fun.

Another plus point for the 207 is the amount of room inside. At the model’s launch Peugeot confidently declared that this car was big enough to entice drivers from the lower-medium sector.

Having run a 207 on long-term test we can certainly back up that claim. There is enough room for four adults to sit comfortably inside and a boot that can handle their luggage.

But space alone is not enough to tempt downsizers and the fact that the 207 in GT trim looks chunky and sporty will help, too.

The GT model has a different front-end treatment to lesser models, with a more pronounced chin and slightly deeper bonnet.

To further differentiate the GT, it also features a small spoiler on top of the tailgate and smart-looking 17-inch multi-spoke alloy wheels. There’s also a full-length glass roof that floods the interior with sunlight and bolstered sports seats inside to continue the sporting theme.

Standard equipment is high, with air-conditioning, chrome-rimmed dials, an aluminium-effect gearknob and a CD/MP3 stereo system.

As an all-round package, the 207 GT THP 150 ticks most boxes – value, comfort and looks. If only the steering and gearbox had received more attention, then it might not become so easily overlooked. 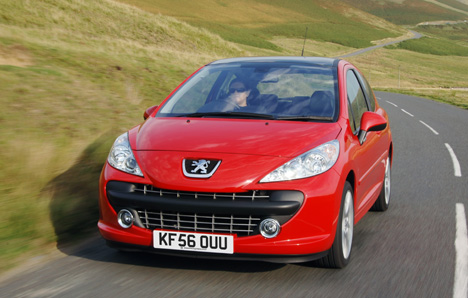