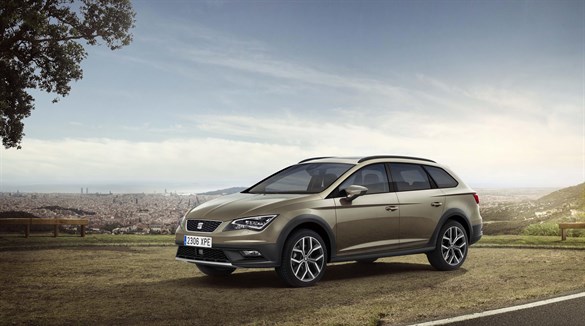 The Leon X-Perience marks Seat’s entry into the popular crossover sector (ahead of the launch of the Ateca small SUV later this year).

It is based on the Leon ST, but has an off-road look, and sits 15mm higher.

Unlike some crossover cars (the Volvo V40 Cross Country, for example), the X-Perience has all-wheel drive. It shares the same system as the Škoda Octavia Scout and Volkswagen Golf Alltrack.

In normal conditions, the clutch transmits most of the engine power to the front wheels, but should traction decrease, the torque is diverted to the rear, making it ideal for job-need cars that have cause to drive on dirt tracks or muddy fields.

The X-Perience will also appeal to drivers that want a different look to the Leon ST, although they will pay more for the privilege (the X-Perience starts at £24,920, while the Leon ST is priced from £19,225).

The X-Perience equals the estate for boot space, with both offering 587 litres with the seats up and 1,470 with them flat. The seats can be folded by pulling a single lever, and the boot floor can also be set at two levels.

The 2.0-litre diesel engine (also found in the Leon) is available in 150hp and 184hp variants, although the latter engine only comes with a six-speed DSG automatic transmission.

We tested the most popular fleet variant, the manual 2.0 TDi 150 SE Tech, which has CO2 emissions of 125g/km and a combined fuel economy of 58.9mpg. During our week with the X-Perience, the fuel economy nudged close to the official figure on longer journeys.

The cabin has an upmarket feel with quality materials. There is a choice of brown Alcantara or all-black leather seats and the interior door panels have matching Alcantara trim. The other distinctive features are the X-Perience logo, which adorns the door sills and steering wheel, and orange stitching. Other than that, it’s a fairly standard Volkswagen Group interior.

The sat-nav (the same as in the Golf) is standard on the SE Tech, along with an upgraded audio/media system with extra speakers, 18-inch wheels and front fog lamps and full LED headlamps.

Front and rear parking sensors and a rear-view camera are available as part of a Park Assistance Pack for £500.

Fleet operators that prefer drivers to carry a full-size spare wheel should note that the X-Perience comes with a space-saving spare (in lieu of tyre repair kit).

After a week in the X-Perience, I wasn’t convinced that many company car drivers would favour it over the Leon ST on price grounds and those that want a crossover may well wait for Seat’s next offering.