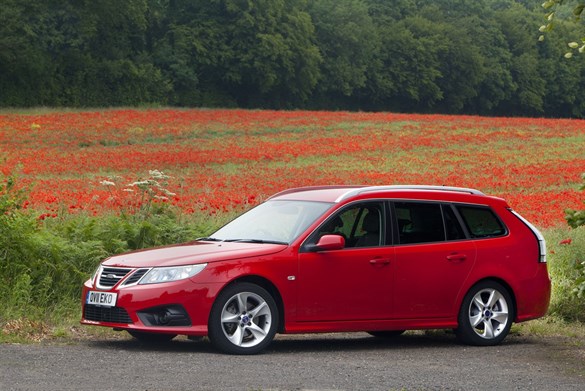 A week ago from the time of writing there was yet more negative speculation about the future of Saab. New reports suggested the company was in danger of being declared bankrupt as the stalled process over its deal with Chinese partners looked to be exacerbated by the Chinese government failing to ratify funding. But here we all are, including Saab.

The continued speculation can't be doing much for customer confidence - they need to know if they are choosing a Saab, that there is support in the UK through the dealer network and, if leasing, though the contract hire industry.

Remarkably, Saab has registered more than 2,000 cars to fleets in 2011. Remarkably because it hasn't built any cars since March.

So the 9-3 Sportwagon we're running must have been one of the last cars off the production line before the factory was put on hold.

Last month I mentioned how it was feeling its age in some areas. It isn't just where other products have been able to leapfrog the 9-3 and its General Motors legacy Epsilon-platform that gave us the 2002 Vauxhall Vectra. An annoying squeak has made itself known going from somewhere inside the car in the vicinity of the rear seat-back, while the audio speaker in the passenger door now works intermittently, usually when braking or turning right.

I've now given up trying to achieve anything near the official combined fuel consumption figure of 62.8mpg after 5,000 miles of driving gently and failing to improve on 49mpg.

And yet there is something noble about the 9-3 Sportwagon. Its proud red paintwork; its chiseled looks; its stoically Saab features - the turbo boost gauge, the headlamp switch that twists the other way and incorporates the headlamp levelling control, and the glare-reducing night panel button.

We all want a positive outcome from the investment bid, but in the meantime the 9-3 Sportwagon seems to epitomise the wartime poster that recently became famous again: 'Keep calm and carry on'.