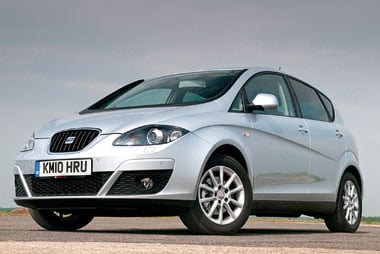 Perhaps the most impressive aspect of Seat’s new Leon Ecomotive is the fact that it equals the original Ibiza Ecomotive for CO2 emissions and fuel consumption just three years on.

The smaller Ibiza impressed when it was launched with CO2 at 99g/km and official fuel consumption of more than 74mpg on the combined cycle, but Seat has now achieved this with a car in a higher segment.

Seat has the same engine and fuel-saving technology on the Leon Ecomotive as Volkswagen has on the Golf Bluemotion.

The range of cars in this sub-100g/km bracket is growing.

As well as the Ecomotive and the Golf Bluemotion, there is also the Ford Focus Econetic, as well as more upmarket choices with the Volvo C30 DRIVe stop/start and the three-door only Audi A3 1.6 TDI, or the petrol electric Toyota Auris hybrid.

With similar CO2 emissions and official fuel consumption figures, there would be little to choose between any of these in day-to-day running costs, but Seat is already celebrating after British Gas signed on the dotted line to take 500 Leon Ecomotive models for its engineers – the first cars that arrived in the UK.

As well as demonstrating how Seat has got a product right, it also shows how well the fleet team has worked to snatch this kind of deal.

Despite its green credentials, performance is perfectly acceptable. According to the manufacturer, it can sprint from 0-62mph in 11.5 seconds, and reach a top speed of 118mph.

The 1.6-litre common rail turbodiesel is a more refined unit than the 1.9 TDI ‘pumpe duse’ engine that has been a staple of VW group products for more than a decade.

The new engine is much quieter, and just about as responsive, despite its smaller capacity.

Although when driving you might feel you’re in a lower gear than you would be in a car with none of the fuel-saving technology that the Ecomotive has – for example driving in third gear at 30mph instead of fourth – you should bear in mind the engine revs would probably be the same as in fourth gear in a car with a standard version of the diesel engine and transmission.

The payoff is far lower revs at higher speeds in fifth gear, which helps contribute to the 70mpg-plus figures.

The Leon is spacious and comfortable with plenty of headroom, and while the purpose of the Ecomotive version is stretching the diesel as far as possible, the styling still gives the Leon a sporty look.

Available in both S and SE versions, the Ecomotive is available with a wide range of equipment, and there are a few items on the options list, too.

Seat is in a prime position to take advantage of fleets looking for sub-100g/km cars with an attractive looking car representing good value against mainstream rivals.