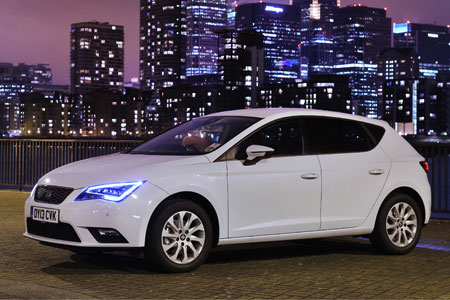 Time was when most cars from Seat were regarded as worthy but dull – inexpensive, but equipped to a relatively basic level compared with most of their rivals.

But times have changed. After a switch in product positioning, Seat is earning itself a fresh image as a stylish and high-quality alternative with a sporting flavour – and no model illustrates this better than the Leon.

By any yardstick, the Leon is one of the better-looking compacts from the Volkswagen Group.

However, strong performance and economical operation are the more likely reasons behind the car’s spectacular success in business motoring.

In our hands, it has spent most of its time on major routes and the high proportion of cruising speed driving has been reflected in particularly good economy, with tank-to-tank returns topping 70mpg on two occasions.

After more than 12,000 miles, I think an overall figure of more than 64mpg says it all for roomy and versatile transport that copes well with the demands of business and family travel.

Despite its modest capacity of 50 litres, the Leon’s fuel tank allows a range that stretches to 600 miles.

Comfortable and responsive, the SE has been as good to drive over mundane journeys as it has been during spells of continental motoring and Seat's best model yet has delivered a faultless performance.

A well-engineered design with excellent detail finish, the only minor flaw in this five-star package is the lack of a completely flat cargo floor when the rear seats are folded.