"It’s devoid of drama and excitement, but that’s meant as a compliment." 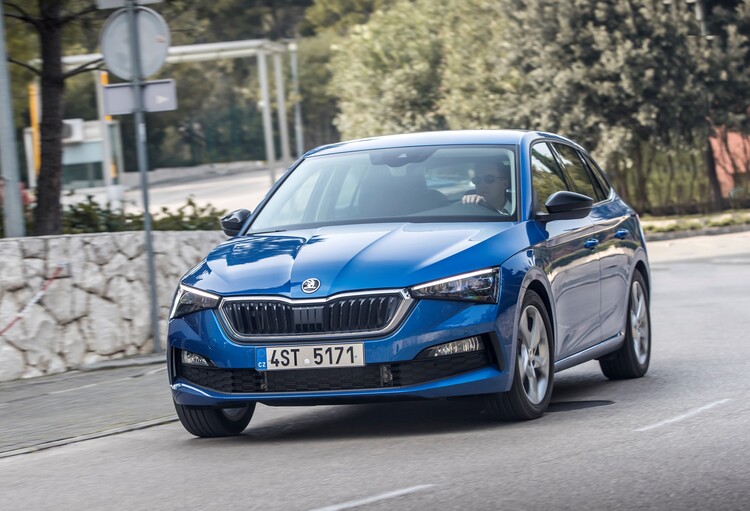 Skoda’s previous attempt at taking on the market dominated by Golf, Focus and Astra didn’t go too well in the UK, with the Rapid never capturing the imagination. Still, it sold well across Europe, so Škoda is having another crack with the Scala.

Available to order now, with first deliveries this summer, it has borrowed some style from Audi, with a chrome-rimmed front grille framed by aggressive LED headlights. The rear sees the glass flow down below the window line into the bodywork, creating a smooth profile. The manufacturer then uses that space, spelling out Škoda in capital letters as a mark of confidence in its new design direction.

Sharing much of its underpinnings from the Seat Ibiza and Volkswagen T-Roc, the Scala has a sensible range of Volkswagen group engines under the bonnet. It starts with a 1.0-litre three cylinder petrol unit delivering 95PS, and rises to a 1.5-litre engine with a handy 150PS. There’s also a 1.6-litre 115PS diesel, but the pick will be that small petrol engine tuned to provide 115PS.

Fuel economy for the 1.0-litre petrol, under WLTP, is rated at 44 -49mpg. Our experience over the model’s press drive suggests the small petrol engine will return a reasonable 40mpg. The figure will drop alarmingly if swift progress is required, as is often the way with downsized engines, but the chassis doesn’t really encourage that style of driving.

The Scala is no hot hatch, instead focusing on being safe, comfortable and predictable. It’s devoid of drama and excitement, but that’s meant as a compliment.

Ride quality is strong, at least on the 16-inch wheels of the SE-spec car. The same applies to the larger 17-inch wheels of the SE L. Both cope with rutted urban roads and remain compliant over all but the worst of surfaces. The optional 18-inch wheels make a difference, but not for the better. Save your money, and some CO2 emissions, and stick with the standard fit.

Available in SE and SE L, the Scala has a standard-fit touchscreen infotainment system with smartphone mirroring, while the top model includes navigation.

The whole car is littered with ‘Simply Clever’ elements and handy design touches to make life easier; the cap for the washer bottle doubles as a funnel, there’s an ice-scraper in the fuel flap that also has a gauge to measure tyre tread depth and, of course, a ticket holder built into the A-pillar.

Space is a highlight, too. With a wheelbase 10cm longer than the Golf, there’s acres of room inside, with four six-footers easily fitting. The boot is also enormous, with a class-leading 467 litres of space with the seats up and parcel shelf in place. It’s all fitted in a cabin that’s stylishly minimal, with excellent ergonomics. Škoda’s budget-conscious culture shows itself in some cheaper material choices below elbow height, but every surface is at least acceptable, if not luxurious.

There’s nothing to complain about, and little to get overly excited about, but the sum of all the parts is far greater than you might expect.