IT’S well known that car manufacturers are blurring the lines between traditional vehicle sectors and niche ones.

Whether it’s superminis and MPVs, SUVs and MPVs, or SUVs and estate cars, there is a growing number of ‘crossovers’ to choose from to cater for the demands of the market.

However, Skoda is currently taking credit for building a car that blurs the line between upper-medium and lower-medium sectors.

The basis for this argument is that the entry point in the Skoda Octavia range – the 1.4 Classic – is £10,750 on the road, which is less than many lower-medium cars. But Skoda believes drivers and fleet operators will also choose the Octavia as a rival to the repmobiles at the lower end of the upper-medium sector because of its generous proportions and enormous boot. The company has a valid point but, in our view, it’s a well-priced, well-equipped lower-medium car. It might only be a couple of inches shorter than a Vectra, but its wheelbase is significantly less.

Another factor is the engine line-up. No other upper-medium car range starts with a 75bhp 1.4-litre petrol engine. A few kick off with a 115bhp 1.6-litre but most go for a 1.8-litre engine with a little over 120bhp.

However, most lower-medium cars offer a 75bhp 1.4-litre as the first step in the range, as does the Octavia.

Until recently, the position of Skoda within the Volkswagen Group has been that of the value leader and, as such, has often had to wait its turn for the latest technology such as pumpe duse diesel and clever automatic transmissions.

However, the new Octavia appears to tick all the boxes from the start.

As well as the conventional 1.4-litre and 1.6-litre petrol engines, there will soon be a 1.6 FSI offering the same level of fuel consumption as the 1.4-litre and the range-topping diesel is a 140bhp hi-tech pumpe duse unit.

There will also be a 2.0-litre FSI in due course, as well as Tiptronic automatic transmission options for both FSI engines early in 2005 and the group’s twin-clutch DSG system will be available for the two diesels towards the end of the year.

The only snag for now is that the 1.9 TDI engine will only be Euro III-compliant, at least in standard manual form, until next year, despite Volkswagen and Audi having had access to Euro IV versions for some time.

It means company car drivers will pay benefit-in-kind tax at 18% on the 1.9 TDI instead of 15%. Drivers might not lose out that much as there might be a cost incurred in making the engines comply with Euro IV when the time comes, which would offset the benefit of removing the 3% diesel supplement.

Skoda’s run-out strategy for the old Octavia includes price reductions and a scaled-down range that will run alongside the new model while stocks last. Estate variants have a while longer to run because the new Octavia wagon will not go on sale until 2005 and the public will get its first sight of the car in the metal at September’s Paris Motor Show.

Meanwhile, the Octavia vRS looks good value, with prices now starting at £13,990 on-the-road before a replacement is launched at the end of 2005. With Skoda gaining access to the latest technology in the Volkswagen Group, we can expect it to be a highly competent hot hatch and great value. 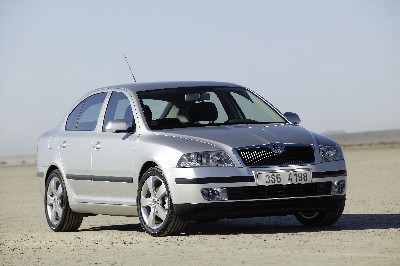 AT £10,750, the entry point to the Octavia range, the 1.4 Classic, was an interesting introduction to the new car.

Devoid of the frills of Ambiente or Elegance models, the rental car-spec Octavia still feels like a quality product. There are one or two areas where a Golf might be executed with a little more finesse, but the quality and materials are first rate.

While air conditioning is restricted to the options list, you get a CD player, electric front windows, several airbags, ABS – soon to become compulsory across Europe – and remote central locking.

It’s a handsome car on the outside, with more than a hint of Volkswagen Passat about it, while the rear light clusters with their individual C-shaped indicator units are similar to those on the Mercedes-Benz CLK.

Despite sharing a platform with the Volkswagen Golf and Audi A3, Skoda seems to have been able to liberate more space, with generous rear legroom and an enormous 560 litre boot.

It might only be able to muster 75bhp from its 1.4-litre 16-valve engine – Vauxhall’s new Astra offers 90bhp from a similar unit and Renault believes 98bhp is the bare minimum in the Megane – but with 93lb-ft available from an accessible 3,300rpm, the Octavia 1.4 Classic keeps up with traffic quite comfortably.

Occasionally, you have to keep your right foot down long enough to make the engine note sound a little coarse – for example, when joining a motorway – but the 1.4 Classic does an adequate job.

No other trim level is offered with the 1.4, and moving up to the 102bhp 1.6-litre for an extra few hundred pounds offers access to slightly better performance with no extra kit.

Ambiente models come in at 1.6 FSI and 1.9 TDI level at just under £14,000, where you start to notice electric rear windows, a CD autochanger and air conditioning are all present and correct.

Either of those models would appear to offer the right balance of comfort, performance and value for money. A spell in the 1.9 TDI Ambiente over the North Yorkshire Moors proved the Octavia is also frugal, comfortably achieving 50mpg according to the trip computer and sustaining higher readings for long periods on our motorway route.

The 2.0 TDI is more of a performance car, with 50mpg more difficult to achieve.

The Octavia’s ride seems a little firmer than the majority of cars in the sector, but it handles neatly with precise steering, if a little lacking in feel.

The Octavia has the potential to be a key player in the medium sector, with excellent road manners and top quality. A choice of economical and performance-oriented diesels strengthen its fleet credentials further.