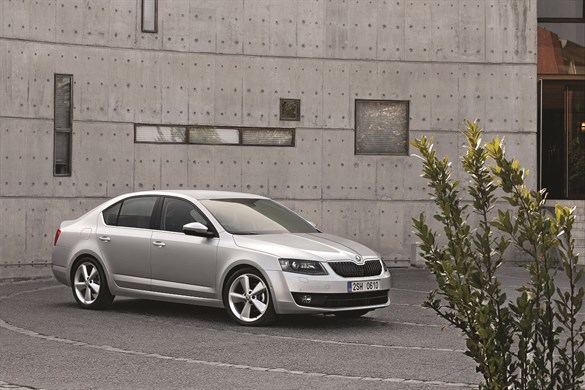 The Octavia has been a resounding success for Skoda, accounting for 44% of its European sales last year. As such, it is the company’s best seller and described by bosses as the ‘icon’ and heart of the brand.

Skoda chief executive Winfried Vahland believes the new Octavia, which goes on sale in March, will lead to even more growth. “We think the third generation will allow us to jump into the bigger players’ market,” he said.

Ambitious plans, perhaps, but the Octavia is well placed to win Skoda new customers. Built on the same platform as the Golf, Audi A3 and Seat Leon – known internally within Volkswagen Group as MQB – Skoda believes class-leading space and value for money, as well as sleek new looks, will make it a winner. It has to succeed if Skoda is to reach its goal of 1.5 million car sales a year worldwide by 2018.

Being designed on the MBQ platform means there are some obvious similarities between the Volkswagen Group models in engines and equipment. Class-leading space is not merely a bold claim for the Octavia either, with 590 litres in the boot, expanding to 1180 litres with rear seats folded. 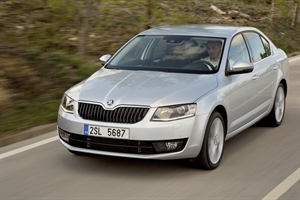 The wheelbase has been extended by 108mm and the front axle moved 40mm forwards to increase passenger comfort and legroom. There is 980mm more headroom and up to 73mm more legroom in the back of the car.

It’s a noticeably bigger car, but the Octavia is also lighter, by up to 102kg, than the outgoing model. The has helped to improve fuel consumption by up to 20% while CO2 emissions now start at 99g/km.

The Octavia will be available with two petrol engines and two diesels from launch in the UK. A six or seven-speed DSG automatic option will be available across the range, with the three familiar trim levels – S, SE and Elegance.

The car we spent most time in on the international media launch was the 1.6 TDI DSG Elegance, which is in the heart of the fleet sector and delivers 104bhp, fuel consumption of 74.3mpg and CO2 emissions of 102g/km. But if you opt for the manual, emissions fall to 99g/km, and we would expect many fleets to choose standard manual form for the lower BIK, particularly those that might operate in the London congestion charge zone. 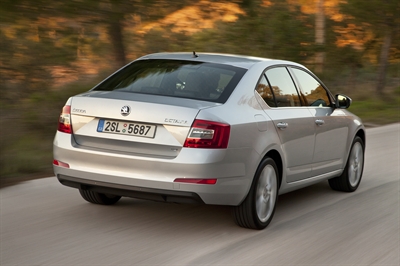 Helped by the significant weight loss, the car was a surprisingly responsive performer on the roads. The ride was a little firm but the handling proved excellent around the rural country roads. This hasn’t been at the expense of comfort as the Octavia cruises well at high speeds with little accompanying engine noise.

Despite carrying many characteristics of a saloon car, the Octavia, like the Rapid, is actually a hatchback. With regard to looks, it could easily pass as the Rapid’s older brother, with only a few minor tweaks including a new ‘fin’ window line in the rear doors. The Octavia looks sleek and stylish, but possibly looks a little too conservative to turn heads.

Standard equipment across the range includes alloy wheels, DAB radio and touchscreen stereo system. Upgrade to the SE for £3,890-worth of additional equipment and Elegance for a further £5,300.

Little touches show the designers have really thought about their audience. A stand-out feature, also available in the new Rapid, is the handy ice scraper in the filler cap. Another highlight is the parcel shelf which folds down to be stowed neatly behind the back seats to boost boot capacity.
Inside, the car has had the most obvious change with refinement and quality of material greatly improved. Instruments are easy to use and the surroundings are comfortable, the newly developed touchscreen infotainment system comes as standard, with the display up to 8 inches in size. 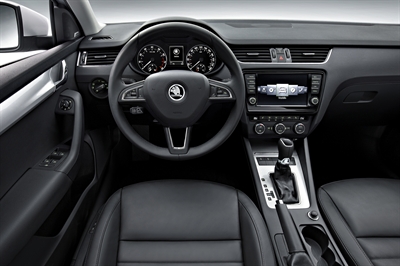 Safety was a key focus during the design process and sees the Octavia equipped with an array of systems including lane-holding assistant, driver activity assist, automatic parking assist and multi-collision brake (which keeps the brakes on after an initial impact to reduce the risk of the car moving if it is subsequently hit in the rear by a trailing vehicle).

All this extra space and technology comes at a cost. The latest generation is more expensive than the outgoing model, with prices starting at £15,990 for the 1.2 TSI S model, while the cheapest diesel is the 1.6 TDI S at £18,040.

However the Octavia is still less expensive than some of its main rivals, with more standard technology on offer.

An 87g/km Octavia GreenLine will be available later in the year, with the 1.6 TDI engine, and is expected to achieve 86mpg. At the opposite end of the scale, a new Octavia vRS – said to be the fastest to date – will also be launched in 2013.

The Octavia has big boots to fill, given the success of its predecessor. Despite reserved styling, it is the most competitive it has ever been and should strike a chord with drivers as well as fleet operators.