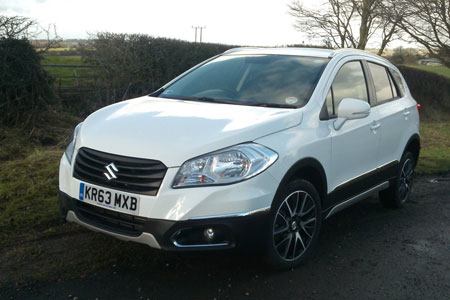 It’s been developed to take some of the toughest off-road conditions in its stride, so common sense dictates that the latest go-anywhere Suzuki model might feel a little rough around the edges in the comfort stakes.

But that’s not the case with the SX4 S-Cross.

For a vehicle designed to make the most of bodywork with raised ground clearance and the tenacity of four-wheel drive, our SZ-T has an impressive on-road personality.

Long-travel strut coils at the front and a torsion beam system with coil springs and independent dampers at the rear combine well to soak up the worst of poor surfaces.

The system also keeps the car on an even keel with minimum body roll in press-on driving conditions.

Thanks to its excellent underpinnings, the S-Cross treats its occupants to a quality of ride that’s not far short of the smooth travel demeanour of a well-sorted saloon and provides progress as comfortable on byways as it is on the smooth tarmac of major routes.

Based on a chassis that is longer than its predecessor's, the new car gets the extra poise it needs to take on major rivals and this fleet-specific version is set for an important role in plans to achieve the expansion Suzuki is seeking in the UK.

Relatively neat handling and tidy behaviour through corners make it relaxed transport for long distance work and this has already been ably demonstrated in a couple of 500-mile days that have highlighted a relaxed cruising gait along with mid-50s fuel economy.

Another aspect of the car’s character that’s already evident is a power output that feels greater than is suggested by the official figures.

Slightly raucous on start-up but generally subdued, the Suzuki’s Fiat-derived motor has a lusty output that feels more akin to that of a 2.0-litre unit than a 1.6-litre engine.