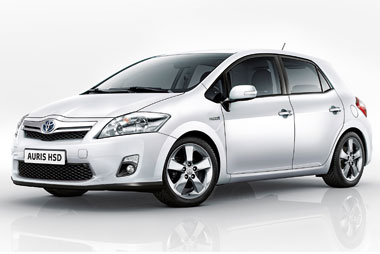 But company car drivers will have to be shown how to get the best out of this 89g/km CO2-emitting electric-petrol car if they want to achieve the 74.3mpg fuel consumption figure.

Consider the evidence based on our test drive: Route A, consisting of 100 miles of fast A-roads, motorways, steep hills and an overworked engine. Result 44mpg.

Step in Toyota’s engineering experts with their advice about how to best drive the car for maximum efficiency.

It consists of understanding the dials to keep the needle in the electric zone (EV mode is possible at speeds up to 30mph and continuously for up to two miles) or electric/petrol combined where the engine is at its most efficient (eco mode).

The trick is to stay away from power mode where the 1.8-litre engine takes over.

On to route B, then, consisting of 40 miles of brief motorway, urban routes and city centre congestion. Sensible driving following Toyota’s advice led to a smooth journey at a decent pace.

And a full four-star ‘excellent’ rating at the end of the journey (each trip gets graded by the on-board computer).

This isn’t a car for reps travelling hundreds of motorway miles.

But it’s perfect for commuters who spend most of their working lives in and around town and city centres, although it’s worth noting that the best CO2/mpg achieved figures are on the 15-inch wheels. Upgrade to 17-inch and CO2 rises to 93g/km while fuel efficiency dips to 70.6mpg.

Toyota is eager to get this car out into the market (it goes on sale on July 1). It recognises that most buyers will not be ‘electric evangelists’, the type of people who would plump for the hybrid-only Prius.

One in four people who consider, then reject, the Prius go on to buy a C-sector car: it’s these people that Toyota aims to capture with the HSD.

John Thompson, marketing director, claims fleets would save £700 on fuel over 60,000 miles compared to the Golf and £1,168 over the Ford Focus, while company car drivers would save more than £2,000 on tax.

Redesign touches produce a bulkier new look compared to the traditional Auris, which is deceptive because the car is more aerodynamic with a low co-efficient drag of 0.28.

Practicality is still an issue. The battery pack takes up the majority of the boot space, leaving just 279 litres – room for a couple of small bags. But that shouldn’t detract from its primary role as an outstanding urban cruiser.