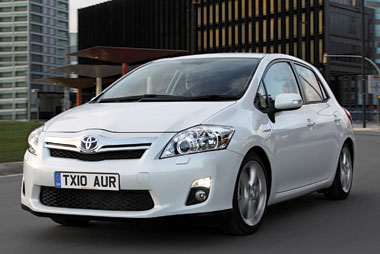 Pitched against the combined might of heavy oil favourites like the Focus, Astra and Golf, the new Auris HSD is facing a formidable challenge in the C-segment.

With the distinction of being the first petrol-electric car to roll from a UK production line, Toyota hopes this additional version of the Auris will prove attractive to drivers it believes like the idea of transport with the cleanest of green credentials but have been deterred by the save-the-planet styling that usually comes with it.

But having the same full hybrid powertrain as the Prius means the HSD is able to boast a headline-grabbing economy potential of 74.3mpg with 89g/km exhaust emissions in standard T4 form.

Adding 17-inch alloy wheels realigns the figures to 70.6mpg and 93g/km for the T Spirit and this is the version we’ll be putting to the test for the next six months as we try to answer the key question of whether hybrid power really is a viable all-round competitor to the trusty diesel.

Toyota expects the fleet sector account for half next year’s sales of the HSD. Priced from £18,950, the model looks an attractive proposition from the accountant’s viewpoint with zero VED, 10% BIK tax and qualification for full first-year corporation tax write-down.

Smart white pearlescent paintwork finish – a £610 option – adds a dramatic dash to the overall appearance and a mixture of leather and alcantara upholstery gives an upmarket feel to the interior.

The economy results of my first 100 miles are encouraging – now I’m eager to see if it’s possible to hit the magic 70mpg figure.