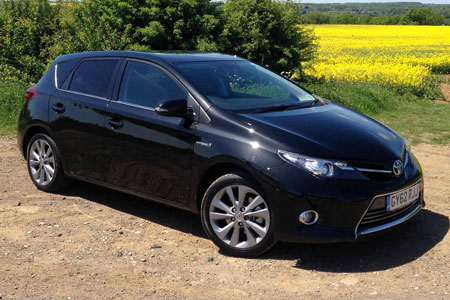 A few hundred miles behind the wheel of the Auris has made me realise what a big improvement this car is over its predecessor.

It looks more distinctive (at least from the front – the rear could be confused with a Hyundai i30), feels more upmarket and seems more capable.

I spent six months in a diesel version of its predecessor in 2007 and, even then, it was competent but had no real USP. It also had a deeply pessimistic trip computer with the temperament of Eeyore from the Winnie the Pooh books.

Boot space was also reduced compared with the standard Auris because the car had to accommodate a battery and other hybrid components.

The latest Auris Hybrid is less of a compromise as it was conceived with a petrol-electric hybrid as one of the powertrain options from the start.

It means there’s no reduction in boot space.

On a recent long journey, the low fuel warning light came on and I decided to let it run for a while before refuelling.

I filled up with 12 miles of indicated range left, expecting the Auris to take almost a full tank of fuel.

After taking on board 36 litres of unleaded and not a drop more, I wondered if Toyota had installed a smaller tank on the hybrid model to ensure there was no impact on luggage space.

After checking I found the hybrid has the same 50-litre tank as other Auris models, but the trip computer seemed as gloomy as ever.

Despite being a new model in the physical sense, disposition is perhaps tougher to change.