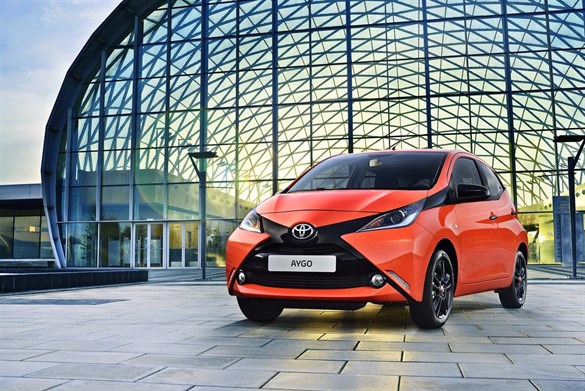 Toyota is hoping the X-factor will help drive its latest model to a top five position in Britain’s list of best-selling small cars.

Featuring a striking design based around the shape of an X, higher power and reduced operating costs, the next-generation Aygo has all it takes to win extra registrations in the hotly-contested city car sector, believes Toyota GB marketing director Chris Hayes.

The styling theme puts a dramatic fresh face on the Japanese firm’s version of the tiny three and five-door hatchback range it has shared with Peugeot and Citroen from a joint venture production line in the Czech Republic for the past nine years.

“We’re currently sandwiched between the French cars in the UK market sales chart but we are delighted with the overall strengthening of our proposition in this segment. Our car is now a better contender that has a more distinctive appearance – I believe the exterior differentiation will play a key role in moving us ahead of Peugeot and into the top five,” Hayes told Fleet News.

“This next-generation model is being launched after a record 16,500 Aygo registrations in 2013. So far this year, sales of the car are up 17% and I think it is entirely realistic for us to anticipate that volume will reach 18,000 this year.

“For 2015, the aim is to reach 24,000 units to account for 9% of the sector and we’re hoping the X-theme will make ours the most popular of the joint venture trio. We think there is a potential for growth in the market for bodyshop courtesy cars, the public sector and contract hire area,” he said.

Toyota’s most successful conquest model is only fractionally longer than its predecessor and the bold styling treatment enhances its road presence as well as providing wider access to a 168-litre boot area.

Improvements in thermal efficiency and reduced friction losses have raised output from Toyota’s 1.0-litre, three-cylinder motor, as well as cutting emissions, and the little unit feels nippy in town and punches above its weight with a relaxed motorway cruising gait. Other revisions result in more direct steering, a smoother gear change and reduced body roll in cornering.

“Pricing is on a par with the outgoing car, so we’re offering higher value along with a wide range of exterior and interior packs allowing customers to personalise their cars. This is a strong upgrade of our city car proposition,” said Hayes.