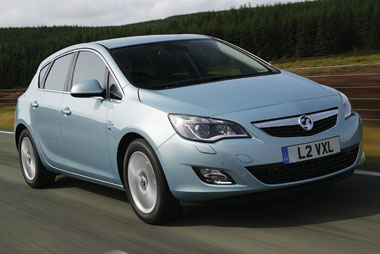 The petrol versus diesel debate has reared its head again in recent months, which must be prompting a few fleets to look again at entry-level petrol engines as a potentially cost-effective alternative.

Drivers’ benefit-in-kind tax liability is higher with the petrol engine (£3,115 compared to £2,436). But the petrol has the edge in terms of depreciation and SMR costs.

Not surprisingly, there’s a marked difference in mpg with the petrol on a combined cycle of 44.8 and the diesel on 62.8.

The key statistic though is pence per mile.

So for high-mileage drivers it is still clearly best to plump for the diesel.

The comfortable ride also makes the Astra a good choice for those clocking up lots of miles.

The stylish exterior is matched by a much improved interior, which gives the impression of a higher class car.

Boot space is also competitive with rivals with a minimum capacity of 351 litres.

But this particular petrol engine has begun to fall behind what rivals offer in terms of efficiency, and with Vauxhall’s ever improving Ecoflex diesel range, fleets have plenty of alternatives.

While the strengths of the appealing Astra hatchback range lie mainly in the Ecoflex range, the petrol model has some appeal for low mileage drivers.