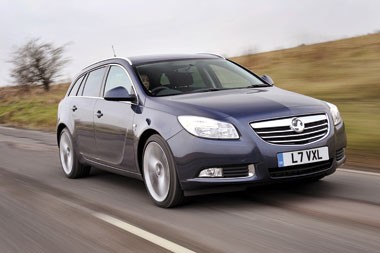 For a model that is not even on sale yet, the Insignia Sports Tourer is proving very popular with buyers.

Vauxhall’s new range-topper doesn’t officially go on sale until April 10, but already it has accounted for nearly 9% of the 23,000 Insignias sold since the order book for the upper-medium models opened in December.

It seems that the new estate’s striking styling is proving enough of an allure to tempt buyers in.

And it certainly is an attractive car.

The familiar front-end of the saloon and hatchback Insignias remains untouched, while the back is a wrap-around tailgate unit that disguises a spacious boot area.

In Sports Tourer (ST) guise, the Insignia offers 540 litres of luggage space with the rear seats in place and up to the tonneau cover (including a shallow under-floor storage area which is standard on all models) – an increase of 10 litres over the voluminous Vectra estate.

It is only when the rear seats are folded down that the Insignia falls short of the Vectra (1,510 litres compared to 1,850).

This puts the Insignia right in the middle of its rivals in terms of luggage space.

"However, we also hope to bring in a new audience drawn to the attractive design of the ST and grow the volume.”

Vauxhall expects the ST to account for 15% of Insignia sales – an increase on the 10% that the estate contributed to the Vectra body mix.

Since the Insignia order bank opened in December, diesel has accounted for the majority of sales, taking a 71% share – 76% of those are the higher-powered 160bhp version of the 2.0 CDTi.
The fleet-specific Exclusiv trim level has taken the largest percentage of sales (39%), while SRi, SE and Elite have accounted for two-thirds of orders.

Fleet will continue to take the lion’s share of sales, accounting for 65% of registrations, which is down from the Vectra’s 70%.

In the future, Vauxhall wants to lower the fleet share to 60% as it chases more retail business.

The retail side will be catered for with the arrival of a 1.6-litre turbo petrol delivering 180bhp to join the rest of the performance-oriented petrol engines.

For fleets, the diesels are the same as offered in the saloon and hatch – a pair of 2.0-litre CDTis delivering either 130 or 160bhp.

The latter will form the basis of a lower-emission Ecoflex
model which will arrive this autumn.

Vauxhall states this will deliver under 140g/km of CO2 in the hatch and saloon, and below 150g/km in the Sports Tourer.

Also due in the autumn is a 190bhp twin-turbo diesel, badged BiTurbo.

But for now the CDTi 160 will do the majority of fleet work, delivering plenty of power from low down the rev range.

It’s not the most refined diesel on the market, but at cruising speeds it settles into a subdued note.

The handling, ride and gear-change are all much more impressive, though, helping Insignia feel light on its toes and remaining flat and composed during cornering.

Inside, the ST is the same as the hatch and saloon, which means a well-designed and well-built cabin with a quality feel.

A plus point for fleet drivers is that no matter what trim level is specified, there are no blank buttons on the dash to remind them that they’re in a lower spec version.

In the back, the low sill makes for easy loading, and there is an optional load-restraining net to keep items secure.

Thanks to the wrap-around rear door, there is a wide loading aperture (and in SE and Elite models the tailgate is powered).

The Sports Tourer is a welcome addition to the Insignia range, delivering a classy-looking vehicle which is practical and well-built.

Although outright load volume is down on the Vectra, the ST still has the useability to make it a firm favourite among fleets.