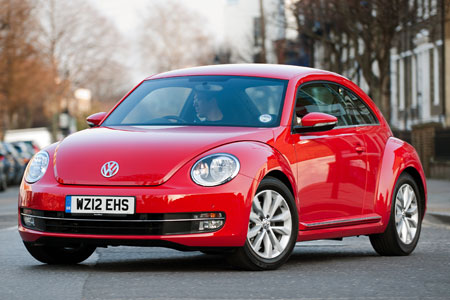 One of the dangers of using retro-styling in a modern car is novelty value when it’s fresh, but feeling very stale a few years in.

Cars such as the Chrysler PT Cruiser and Jaguar S-Type are good examples, as well as the so-called New Beetle.

Designers can also draw themselves into a corner when relying on the influences of past models. How do they go about launching a fresher version of a model inspired by a car first seen in 1938?

The latest version of the New Beetle – now just called Beetle – is still clearly linked to the original model, but in broadening its appeal Volkswagen has made it longer and lower as well as ditching some overtly kitsch features.

The interior does away with the vase and while relying on familiar looking Volkswagen switches and buttons, it still has a unique feel.

The longer profile of the Beetle also gives it more of a coupé-like appearance. The front end, particularly the headlights, actually makes it seem more like the original Beetle than its immediate predecessor. Volkswagen also offers other accessories, such as retro-look wheels.

When we first drove the Beetle only petrol versions were available, but the order books have just opened for 2.0 TDI variants, increasing the car’s user-chooser appeal with CO2 emissions from 129g/km.

The petrol engines are the latest versions of Volkswagen’s low displacement turbo-charged units, so for the power they deliver they are relatively clean.

We tried a 1.2 TSI, equipped only with Volkswagen’s seven-speed DSG dual-clutch automatic transmission.

The turbo helps make the most of the 105bhp, while the auto makes it easy to drive. The car is easily roomy enough for four adults (although three-door only) and while it is a far more grown-up product than the model it replaces, it still has a sense of fun.