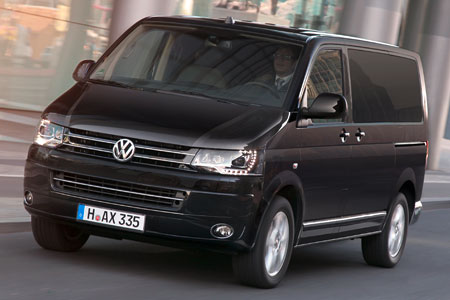 Often when selecting a vehicle suitable for carrying VIPs or executives who will work as they travel, the easy choices are one of a number of large saloons, most of them German.

Cars such as the Jaguar XJ are particularly popular in the UK when viewed alongside rivals such as the BMW 7 Series, Mercedes-Benz S-Class and Audi A8.

To a lesser extent, the Lexus LS (in a market dominated by six-cylinder diesel) sometimes features as an alternative.

But there is also a Volkswagen-badged alternative that actually beats those luxury saloons in many areas.

Before you think I’ve gone mad and begun touting the brand’s 10-year-old luxury saloon as a convincing rival, I’m not talking about the Phaeton.

The wi-fi equipped Caravelle Business is an upmarket version of the van-derived people carrier. 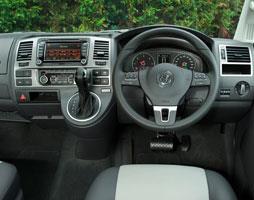 It is designed as a chauffeur vehicle, with the highest levels of comfort reserved for rear-seat passengers.

The interior has lacquered walnut veneer on panels that would normally be finished in plastic.

The middle row seats, upholstered in the same fine leather, can face the rear for meetings and a folding table is also fitted (on runners so it can be moved).

There is a fridge as standard as well as an auxiliary heater to keep the vehicle warm when parked.

No luxury car combines all these features as standard for the money and in such a spacious interior.

In outright purchase terms, the Caravelle Business costs as much as a six-cylinder diesel luxury saloon with a few options selected.

You get even less change from £70,000 for the all-wheel drive 4Motion variant. Volkswagen’s seven-speed DSG is standard, and the 2.0 BiTDI 180bhp diesel is the only engine offered.

It drives well enough and is refined, but is slower and more ungainly on the road than a 730d or Jaguar XJ. But it would also have lower SMR costs than those luxury cars.

For the driver, the Caravelle Business has VW’s top tier audio system and sat-nav as standard.