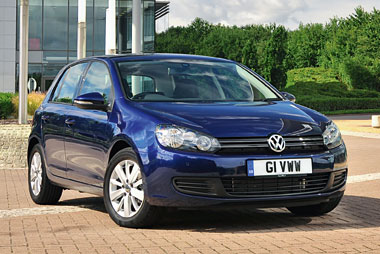 It’s sometimes said that it’s the small things that matter, and the aspect of the Golf which has most impressed me recently is its reversing camera.

Part of the park assist pack (£710), which also includes Volkswagen’s park assist technology and front and rear parking sensors, the camera lives behind the VW badge on the boot.

It is only when reverse is engaged that the badge flips over, and the camera emerges from its hiding place. It may sound unnecessarily complicated, but it ensures the camera lens remains clean and gives you a perfect vision of what’s behind you.

The usefulness of this was highlighted when I drove another test car which had a reversing camera mounted in the more typical place of just above the registration plate.

In the current weather, this was covered with dirt after just a few miles, meaning the picture became just a blur and the camera virtually useless.

It seems strange to let this device overshadow the rest of the car, particularly the excellent DSG gearbox.
But I think it’s this attention to detail which makes the Golf such a strong fleet package overall.

The 1.6 TDI engine, too, is living up to expectations.

With 105bhp it’s no firecracker, but offers ample performance and flexibility, and has an official combined fuel economy of 60.1mpg – 57mpg-plus is a regular occurence.