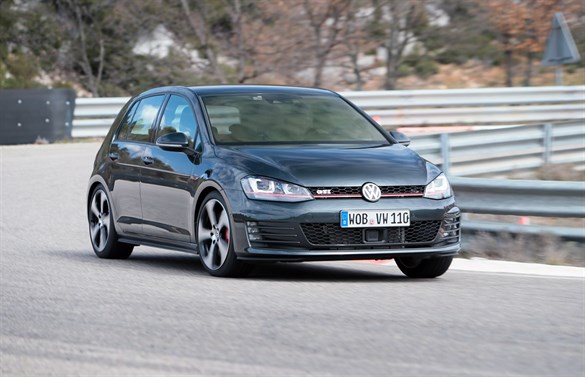 Changes that have delivered sharper performance while also allowing a dramatic cut in tailpipe emissions promise to drive the latest GTI onto many more company choice lists, believes head of fleet Michael O'Shea.

“Like its predecessors, the last GTI was regarded as an icon by driving enthusiasts but a CO2 figure of 176g/km was way above the ceiling for many companies and effectively ruled it out of the policies. But the work to cut back on emissions means the potential to increase our business has been improved.

“Add to that the fact that engine output has been boosted by 10bhp means we have best of both worlds benefits to talk about – I think we'll soon be back on the lists in a big way,” he told Fleet News.

Speaking as the latest version of the classic hot hatchback was launched in France, O'Shea predicted a surge of interest from user-choosers and added: “The seventh version of the Golf has been positively received by company drivers since it was launched in January and these engineering benefits will build on the strong sales we've achieved so far this year by making the range stronger and a more appealing proposition to leasing companies and end users alike.”

As before, the car advertises its performance credentials by sitting on lowered suspension and retains distinctive red brake callipers and two big exhaust pipes to deliver a throaty roar from its brawny motor. But the signature radiator grille red stripe feature extends into the headlights for a more dramatic appearance, backed by daytime running lights and smoked LED units at the rear. 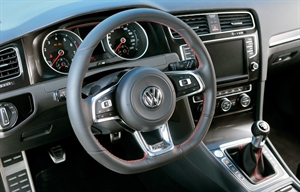 For the first time, GTI aficionados are being offered a factory-fit higher output option to boost power to 226bhp and raise top speed to 155mph - but most drivers should be satisfied with the standard car's performance, which sends the speedo needle swinging to the 62mph mark in just 6.5 seconds in the DSG version.
But fleet chiefs are likely to be more impressed with the 14% economy improvement from the latest TSI motor and five band lower insurance premiums achieved by a raft of safety equipment including post-collision braking, which automatically applies the brakes after an accident to reduce the chance of a second impact, city emergency braking, radar cruise control and front assist, a feature that alerts the driver if the car gets too close to the vehicle in front.

Combined with a 40kg weight reduction and lower drag, the higher power heightens the driving pleasure of a model that has been a hot hatch trailblazer ever since it was introduced in 1976.

Excellent detailing gives an even more upmarket air to a package that combines speed with spaciousness and practicality. Add impeccable balance, superb handling and quicksilver response and the latest version is a delight that even comes with a new progressive steering system to provide greater alacrity through the bends while still managing to make parking less of a chore.