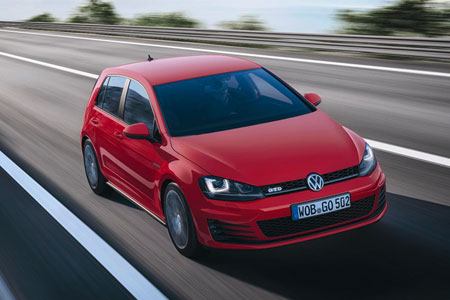 The Golf GTI might have gained iconic status in some eyes over the years, but it’s a little known fact in the UK that there has been a hot diesel variant of the Volkswagen for almost as long.

The first Golf GTD appeared alongside the Mk1 GTI, but it wasn’t until the GT TDI of the fourth-generation Golf that UK customers really showed enthusiasm for diesel version of the hot hatch.

Such enthusiasm for high-performance diesel cars has never been stronger, and the technology is now sophisticated enough to ensure a strong preference among some for the extra low- to mid-range response compared with petrol engines.

The latest GTD arrived on the market this summer alongside the latest version of the GTI, and as well as all the improvements that make the seventh-generation Golf a better car than its predecessor, including some weight reduction, it also has a handy power boost up to 184bhp.

And despite being a ‘hot hatch’, Volkswagen expects 60% of GTD models to fall into the hands of company car drivers.

Luckily there are plenty of rational reasons for having the GTD on your fleet. The highest costs of running vehicles are invariably depreciation, and even setting aside the fact that the Golf has class-leading residual values percentages compared with rivals, perhaps a more impressive comparison can be drawn with the latest GTI.

The GTD might not be as fast as the slightly more expensive GTI in a sprint, but it has a much stronger residual values forecast.

That equates to a saving in depreciation of more than 1.3p per mile.

The two cars are closely matched for SMR costs, but based on official fuel consumption figures the GTD would also cost 3.5p per mile less.

The result is that running both cars over this cycle, the GTD would be almost £4,000 less expensive over the basic running cost elements than the GTI.

The GTD is also quite well equipped for the money. It comes with smoked LED rear lights with LED registration plate illumination, along with standard bi-xenon headlights with LED daytime running lights, chrome dual tailpipes, 18-inch alloy wheels, side skirts, a rear diffuser, sports suspension and a large roof spoiler – much like the GTI.

It also features Front Assist, which warns the driver in the event of coming too close to the vehicle in front, can prime the brakes, and operates at up to 99mph, City Emergency Braking (which can automatically brake the vehicle at speeds below 18mph), and radar-operated cruise control. 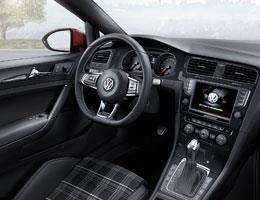 Like most other Golf models, a driver profile selection is available, offering four different programmes to allow customers to match their car settings to their desired driving style.

The standard available programmes are: Eco, Sport, Normal and Individual.

Each of these modes alters the throttle mapping and engine management (among other parameters) to the chosen style, so in Eco mode, for example, the engine management, air conditioning and ancillary systems are controlled to achieve maximum fuel efficiency.

The most noticeable aspect of this feature was a slightly more raucous exhaust note in Sport along with sharpened responses, and a more relaxed demeanour in Eco mode.

Not that the GTD doesn’t feel sharp enough in Normal mode. It has direct and responsive steering and feels supremely capable on twisty roads, its tyres reluctant to yield when it powers around bends and the well bolstered sports seats keeping occupants firmly in position.

We never got anywhere near the 67.3mpg recorded on the official test cycle – mid- to high 40s was more the norm – but the engine was still tight with less than 1,000 miles on the clock and in our experience Volkswagen diesel engines are rarely too far away from the official figure in normal use.

While the Golf GTI might win all the plaudits and have the emotional appeal, the GTD stands out as a far more logical choice and anyone choosing one will be satisfied in the knowledge that the GTD is just as capable but also saves them and their company money.