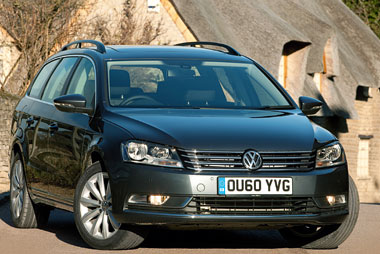 Volkswagen became a serious player in the fleet market with the launch of the fifth-generation Passat in 1995.

And in the badge-conscious UK the Passat has occupied a privileged position since then, seen as a cut above the rest of the mainstream upper-medium sector.

The car that Volkswagen calls the seventh-generation Passat is now available with deliveries to customers starting this month.

The reason we question the ‘new’ tag is merely based on the fact that this version has so much of the previous Passat in it.

But this Passat has a number of important changes over the previous versions and drivers will have access to some hi-tech features – some of which are a first for this class.

We tested the 2.0 TDI SE estate. That engine and equipment combination is expected to be the best seller, and the Passat estate is predicted by Volkswagen to outsell the saloon for the first time in this generation.

It keeps the main features of the previous entry-level version, but also has an iPod interfaceand a leather-covered multi-function steering wheel as standard.

This monitors the driver’s behaviour at the start of the journey and, later in the trip, if inputs and movements are judged to be impaired, a message will recommend taking a break.

The 2.0 TDI engine is essentially carried over from the previous version of the Passat, but the whole diesel range comes with additional fuel-saving features.

Battery regeneration and stop-start technology helps bring down the CO2 emissions of this 140bhp 2.0 TDI estate model to an astonishing 120g/km, with fuel consumption of 61.4mpg on the combined cycle.

The Passat will sprint from 0-62mph in 10 seconds and its 236lb-ft of torque at 1,750rpm means it feels confident when overtaking.

It is also remarkably quiet. Most readers will remember when Volkswagen TDI engines, not that long ago, always ticked the boxes for fuel economy and performance, but were behind others when it came to refinement and noise suppression.

The latest range of common rail diesel engines is much better, and this Passat also has thicker side glass as well as noise-reducing technology in the windscreen.

Our test car was also fitted with Volkswagen’s parking assistance gadget which measures potential spaces for parallel parking and can steer the car neatly in as long as the driver controls the car’s speed carefully.

I think I do a decent job at parking, but the Passat performed the task as well as I normally do.