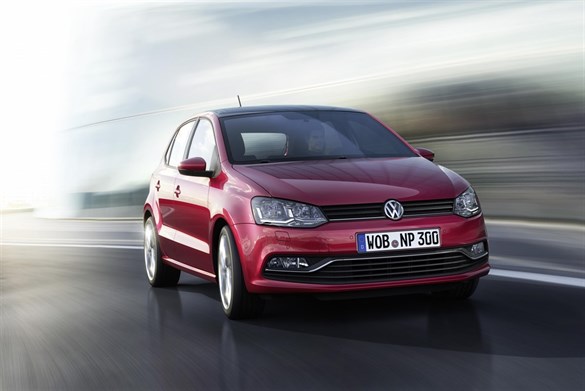 It’s clear that this revised Polo is an evolution rather than a revolution. Outside, only a subtle grille and rear bumper change hint at an update, with a few new paint colours thrown in for good measure. The major changes are under the skin, with a revised interior and new engine line-up.

The previous best-selling engine, the 1.2-litre, has been retired and replaced with two new 1.0-litre three-cylinder engines, as seen in the smaller Up model, with 60hp and 75hp respectively.

With a list price of £12,960, this 1.0-litre 75hp SE model replaces the previous Match edition, and is likely to be the top seller across the range.

Inside the cabin, the premium fit and finish of the car is immediately apparent. The steering wheel has been lifted directly from the current Golf, with sculpted leather and easy-to-access steering wheel controls for entertainment and the optional cruise control.

The most obvious update, however, is the touchscreen system, standard across the whole range. The S model gets a 5-inch model, while SE and above are fitted with a 6.5-inch capacitive screen, that is clear to view, and responsive to use. All models also include DAB radio, Bluetooth connectivity and a USB socket for charging and music playback.

The Polo is a very practical supermini, seating four tall adults with ease. The boot is narrow, but removing the false floor gives extra depth, and the rear seats fold fully flat. Storage pockets are abundant, with a large glovebox that is square and deep.

While the Polo is solid and well built, it is certainly more function than form. It’s not a car that would offend, but lacks the character of some of its rivals. The seats begin to feel uncomfortable after a while, and don’t offer the same support of those found in the rival Fiesta, but the Polo’s entertainment and interior design are well ahead.  Some may call the interior plain, but it’s not likely to date as quickly.

Safety kit is also high on the agenda for Volkswagen, with post-collision braking fitted as standard across the range.  This automatically applies the brakes following a collision. As you might expect, we didn’t get the chance to trial this feature, but any effort to reduce the impact of a collision is welcome.

The three-cylinder engine feels smooth and nippy, only beginning to struggle on hill climbs. It copes well with general town and country driving, and while initially noisy on the motorway, soon settles down.   It’s not an engine you’d want to drive hundreds of motorway miles with, but the occasional trip wouldn’t be ruled out.

The ride is smooth, and the tall proportions and large windows make visibility excellent, although the rear view mirror is a little small. Economy is reasonable, with the engine returning a combined figure of 58.9mpg.

The main stumbling block of this otherwise capable engine is CO2 emissions. With petrol engines in both the Fiesta and 208’s ranges achieving sub-100g/km, the 108g/km offered by the Polo seems a little off the mark. It’s something the German manufacturer will address later in the year, with the launch of the Bluemotion model.

For the first time, Volkswagen is to offer Bluemotion models in both petrol and diesel variants, and while a shame it is not available at launch, it’s likely that these models will have much more fleet appeal. CO2 emissions for the 1.0-litre petrol Bluemotion car will be 94g/km, while the diesel will emit 82g/km CO2.

The updated range, excluding these models, is on sale now, and the first deliveries are expected early this summer.

If your fleet needs a practical, efficient and safe supermini, then the updated Polo is a good choice. With one of the diesel engines, or the 1.4 TSI arriving soon, it may even be suitable for someone looking to downsize from a Golf. The cabin experience and quality is not a million miles away, and the car doesn’t feel small.

It may lack the driving character and design appeal of the Fiesta or 208, but this facelift is a worthwhile upgrade to an already well respected car.