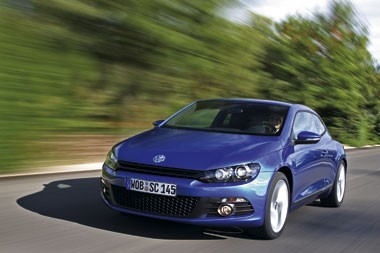 As I get older I find the marketing speak ploughed out by car manufacturers increasingly annoying.

And perhaps the most annoying thing is when they try to make you believe a car is something other than what it plainly is.

The most notable example of this is calling a car a coupé when it isn’t – witness SEAT calling the new three-door Ibiza the SportCoupé (it isn’t, it’s a hatchback).

The same can be said, although to a lesser extent, of the new Volkswagen Scirocco.

It’s not a coupé in the mould of the original version from the 1970s, nor the Corrado version which superseded it in the 1990s, but it looks sporty and low-slung enough to differentiate it from the common-or-garden Golf on which it is based.

The new Scirocco has remained faithful to the Iroc show car of last year, with a slanted, aggressive front end and wide-hipped backside.

The shallow, tapering glass area emphasises the ‘coupéness’ of this hatchback.

Due on sale from September 1, the Scirocco will initially be available in one version – the 2.0 TSI.

This is essentially a Golf GTI in prettier clothes, sharing the same chassis, running gear and 200bhp turbocharged petrol engine.

It will be priced at £20,940 for the GT specification, which includes 18-inch alloys, adjustable damping/throttle/steering known as Adaptive Chassis Control (ACC), climate control and leather trim. For reference, a Golf GTI three-door costs £20,850.

Early next year a 1.4 TSI, which uses a supercharger and turbocharger to deliver 160bhp, and a 140bhp 2.0 TDI diesel will arrive.

All models will come with ACC as standard. Prices for the standard non-GT cars and the new engines have yet to be announced, but expect a base 1.4 TSI to cost in the region of £18,500. A six-speed semi-automatic DSG gearbox is available as a £1,330 option.

All three variants are bound to find favour among user-choosers. Firstly, the car has the Volkswagen badge, secondly it looks great, and thirdly it will sell in far fewer numbers than its Golf stablemate. Roughly 65,000 Golfs find homes in the UK each year, but Volkswagen expects to sell just 9,000 Sciroccos.

Fleets will account for around 40% of this total. For the remainder of this year, with just the range-topping 2.0 TSI on offer, Volkswagen expects to sell 3,350 models.

The reason the Scirocco will sell in fewer numbers is down to its usability. A traditional Golf hatchback offers more room for front and rear passengers, and a significantly larger boot.

The Scirocco is marketed as a four-seater but in reality the rear seats are limited in their usage – children and very short people only need apply.

Inside, the Scirocco uses plenty of familiar Volkswagen architecture.

The dashboard is borrowed from the Eos although there are a few items to differentiate the two, such as bespoke door handles and instruments on the Scirocco.

The front seats are smart and heavily bolstered, as you would expect of a ‘coupé’, while in the back are two individual, bolstered rear seats.

Two versions of the Scirocco were available to test – the 1.4 TSI with six-speed manual gearbox and a DSG-equipped 2.0 TSI.

First up was the 1.4, which produces a fizzy response and performance which belies its diminutive capacity.

With turbocharger and supercharger this engine has zero lag and races up to the red line with gusto.

The six-speed manual gearbox shifts cleanly enough, although it did prove a little unwilling to engage ratios on downshifts into second on several occasions.

The higher-powered 2.0 TSI feels, unsurprisingly, much like a Golf GTI, which is no bad thing.

The turbocharged engine delivers a decent punch from low down in the rev range and offers ample performance in all gears.

It’s just a pity that a manual gearbox model wasn’t available as this will undoubtedly be the more popular option.

The ACC adaptive chassis system works well, although I still have my doubts as to how many people will actually want or use it.

Pressing a button moves the car from ‘comfort’ to ‘sport’ and there is a noticeable change in the throttle response, suspension and steering feel. However, just left in ‘comfort’ mode proved to be an ideal compromise between comfort and handling.

Inside, the Scirocco is best suited to two adults as the rear roof line descends into the cabin and the tapered side windows give a claustrophobic feel in the back. And the boot space is limited, and also difficult to access thanks to a high loading sill. But for most buyers neither of these faults will matter.

With great looks and keen pricing, the Scirocco is bound to succeed. User-choosers looking for something a little different from a Golf GTI will be clambering to get hold of one.

And once they have children they will, Volkswagen hopes, graduate up to a Golf GTI. Now that’s clever marketing.