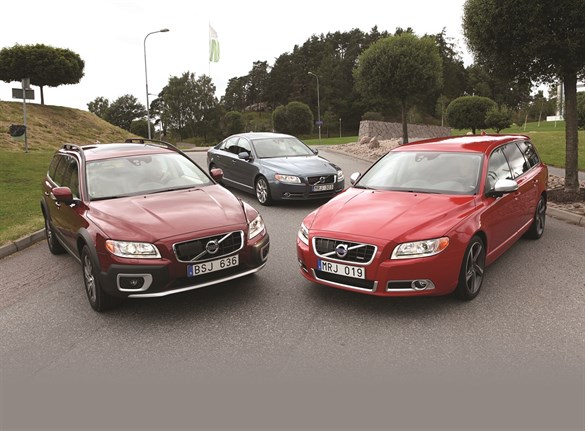 Ultra-low CO2 emissions in Volvo cars have previously been the preserve of the 1.6-litre diesel DrivE models.

But for the 2012 model year, many large Volvo models benefit from fuel-saving technology that helps deliver remarkably low CO2 emissions and fuel consumption.

The headline-grabbing figures are for the upgraded 2.4-litre D5 engine, which now comes with 215bhp. In the S60, with a manual gearbox, CO2 emissions are 124g/km.

Volvo believes these changes, together with the introduction of Euro V-compliant DrivE S80 and V70 models, will give it a clear lead for running costs and tax liability against premium rivals.

The 2012 model year Volvos also bring some new connectivity features thanks to the optional Volvo On Call system. Drivers with an iPhone or HTC Android can download a free application allowing them to control some of the car’s functions remotely.

On Call currently costs £320 for two years on large Volvos with the option to extend the subscription for longer. Current features are shown in the panel, but further development will include synchronising servicing with the driver’s smartphone diary and communicating with the Volvo service centre to book itself a slot, also notifying the garage of any faults or replacements needed.

Volvo chief executive Stefan Jacoby said: “This is much more than a gadget. The mobile application is the first step in our connectivity strategy. We have started to build a bridge to the future – and the mobile app will be extended with a range of possibilities.”

The V70 is a proper estate car and our test car was the R Design version that adds larger wheels and some sports-inspired bodywork.

The five-cylinder diesel’s off-beat note on start-up and when accelerating is a welcome alternative to four-cylinder engines of similar size and power, and sounds quite racy when under load.

But it’s remarkably quiet when running at a steady pace. The seats are among the best in any car for comfort, and the V70 feels like high mileage would be no trouble.

One of the challenges for the Volvo S80 has been its acceptance as an executive car alternative. Used car buyers tend to treat it as any non-premium large saloon, hence its poor residual values.

But the S80 feels every inch a luxury car and with the new D5 engine has the performance to match. The interior has a subtle warmth absent from the default choices in the sector.

The S80 is comfortable and refined, and although most are probably sold with an automatic
transmission, the D5 manual’s 129g/km will be appealing. Choosing the auto still means the car
is lower than the 160g/km capital allowances threshold.

Another challenge for Volvo with the S80 is now that the D5 is so frugal and has such low CO2 emissions, the 1.6-litre DrivE version now perhaps looks like it isn’t working hard enough – the D5 is only 10g/km higher with an extra 100bhp.

Some XC70s find their way on to blue-light fleets as paramedic rapid response vehicles, while there aren’t too many rivals to choose from that follow the same concept.

Effectively a V70 with increased ground clearance, we tried the XC70 D5 AWD on a tricky off-road course which looked far too challenging for anything that was based on a conventional car.

The XC70 found the going rather tough, but impressed with the way it seemed to continue. One test car got stuck and had to be towed, but the rest cleared the course. It wouldn’t be first choice to go off the beaten track, but it does offer reassurance that it can cope with some tough terrain.