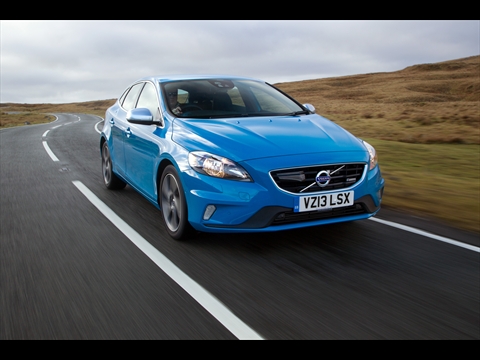 The crowded C-segment has traditionally been a struggle for Volvo. Until last year it had only a selection of misfits to compete with premium and high-end mainstream hatchbacks: the three-door C30, the S40 saloon and V50 estate.

But the situation changed with the launch of the V40 – the brand’s first ‘premium’ five-door hatchback.

For 2013, the V40 range has been extended to include the sporty R-Design and rugged Cross Country.

With the R-Design changes have been made to both the V40’s interior and exterior to give it a sportier look.

They include a more aggressive front end and a silk-metal framed high gloss grille with R-Design logo. The mirror caps have the same silk-metal finish while the side windows have a chrome trim.

At the rear there is a new ironstone diffuser with twin tail-pipes. Diamond-cut five-spoke 17-inch alloy wheels come as standard with the option of upgrading to 18-inch wheels.

Inside, sports pedals have been added and the R-Design logo features on the backrest and leather steering wheel. The R-Design logo also flashes up on the screen when locking/unlocking the vehicle.

On the road the R-Design doesn’t live up to the sporty tag but that’s down to us testing the D2 with the standard V40 chassis.

There’s an optional sports chassis, which lowers the ride height by 10mm and has a more responsive drive.

As you would expect with Volvo, safety is a strength across the V40 range. The world’s first pedestrian airbag is standard. If sensors in the front bumper detect contact between the car and the pedestrian, the rear end of the bonnet (made of soft metal) pops up along with an airbag. It works at speeds of 12mph to 31mph.

Also standard is City Safety – Volvo’s Autonomous Emergency Braking (AEB) system – which now works at speeds of up to 31mph.

Volvo has moved away from having a specific eco badge and the entire V40 range features stop-start as standard, regenerative braking and low air/rolling resistance.

CO2 emissions start at just 94g/km on the V40 R-Design. This means it will qualify for the 100% first year write-down allowance when the threshold lowers from 110g/km to 95g/km this April.