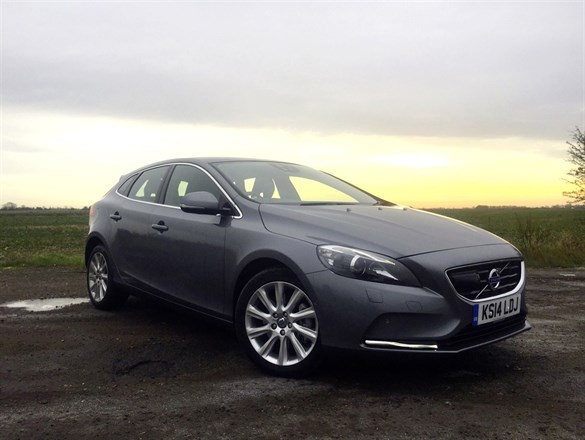 Volvo’s compact cars have often relied on other manufacturers for diesel technology.

In the past, Volvo’s four-cylinder diesel engines have been designed and build as part of a partnership between Ford and PSA.

But as the Swedish company was passed from Ford ownership to Chinese automotive company Geely in 2014, it has gradually had to build for a future beyond the legacy of its recent history.

Just over a year ago Volvo introduced a new line-up of four-cylinder petrol and diesel engines. Initially available in S60 and V60 models, they became available in the V40 hatchback in the second half of 2014.

We’ve recently taken a V40 using the new D4 diesel. It’s a 2.0-litre engine producing 190hp, and with the standard six-speed manual transmission has Co2 emissions of 99g/km – remarkable for a car with that power output.

Our car came to us a few months old as it had already been used by Volvo for media launch activity. We decided to choose the automatic version, which uses the acclaimed eight-speed ZF transmission already in service in various BMW, Jaguar, Land Rover and other models.

The penalty for the expense and comfort of an automatic is an extra 10g/km of CO2, although at 109g/km it’s still on a par with the manual Volkswagen Golf GTD Fleet News has on its fleet.

As someone who drives well over 20,000 miles a year, many of which will be in stop-start traffic, I’d rather pay extra for the convenience.

The V40 was launched in 2012 and became the first car to provide a pedestrian airbag as standard. It also comes equipped with Volvo’s City Safety autonomous emergency braking system as standard.

One of the options fitted to our test car – keyless drive and personal car communicator (£550) – has been playing up as the car sometimes refuses to detect the key on board. Volvo is checking it out and we’ll update you after we get the car back.