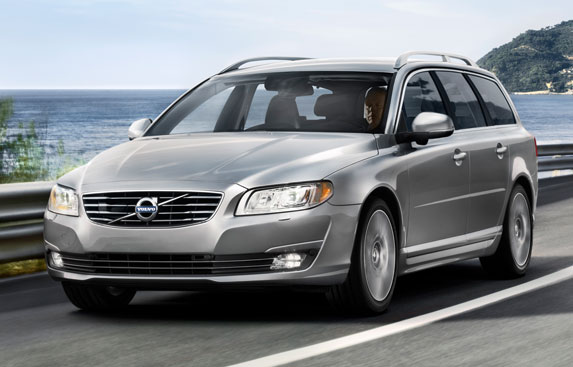 The V70 is one of the first Volvo models to feature the new four-cylinder Drive-E diesel engines, which offer company car drivers high performance combined with low CO2 emissions.

DrivE used to be Volvo’s mark for its lowest-emitting model in each range, but it is now being used as an umbrella term because all cars in the range will be as efficient as possible, not just one particular model.

It will be added to the V40 at the end of this year and rolled out to all Volvo models within two years, including hybrids.

The engines are the first sign of new Chinese owner Geeley making its mark on Volvo.

Previously, it relied on Ford-PSA for four-cylinder units, but the new engines have been built in-house at Volvo’s engine plant in Sweden.

The 2.0-litre four-cylinder D4 diesel engine – the first of the Drive-E range – has higher performance than the outgoing five-cylinder 2.0-litre engine and lower fuel consumption than the current four-cylinder generation.

Fuel economy savings are 10-30%, depending which engine you’re comparing.

“If you take a four-cylinder Drive-E engine versus any six-cylinder engine, there’s a massive weight and size reduction for the same power,” says Derek Crabb, vice-president powertrain engineering at Volvo Cars.

“The power you get from an engine has nothing to do with its size; it is about the amount of air that you can get to flow through it. You can also make an engine more efficient if you make it smaller.

“So, if you can get more air through a smaller engine, you can still get the same power, but at better efficiency.”

The diesel engine is the first to feature i-Art technology, a new common-rail diesel injection system, which makes sure fuel use is at its optimum level throughout the combustion cycle. This delivers a 2% fuel saving and lowers CO2.

Emissions for the V70 automatic, which we tested, are 117g/km (12g/km below the equivalent BMW 5 Series) but drivers still get 181hp.

The new D4 engine isn’t quite as refined as rival diesel models and the new eight-speed automatic gearbox feels calibrated for comfort rather than responsiveness, although that rather suits the V70.

With 575-litre bootspace, the V70 will appeal to fleets with equipment to carry, such as the police.

Volvo expects to double current D4 sales with the new Drive-E engines, which should renew interest in the V70 during the latter stages of the models life cycle.

There are a range of business editions available with features aimed specifically at company car drivers, such as Bluetooth and DAB radio.

But company car drivers will face a significant wait for the new D4. Current lead times are four months – double that of every other engine available within the range.