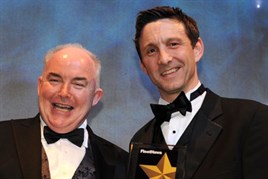 Steve Chater will have witnessed space in BMW’s trophy cabinet becoming more precious during his time as head of corporate sales at BMW.

While he didn’t leave the Fleet News Awards with his hands quite as full as in 2011, the German manufacturer still won a headline award voted for by fleet operator readers as well as taking home a class win for the 5 Series.

The 5 Series competes in a highly competitive sector, where efficiency is becoming as important as style, performance and prestige.

While the range launched with a class-leading low-CO2 output of 129g/km for the 520d saloon in 2010, BMW has improved on this since, and has also introduced a super-efficient 520d ED with CO2 emissions of 119g/km – a figure that was achieved by the original Volkswagen Golf Bluemotion just a few years ago.

BMW was also named fleet manufacturer of the year, one of the categories that is voted for by named fleet operator readers of Fleet News, with suppliers and others unable to vote – a true barometer of how customers feel about manufacturers’ performance as suppliers beyond just their ranges of vehicles.

Since judging took place in January there have been developments in the BMW range.

The 5 series GT is now offered with a new entry-level 2.0-litre diesel engine, but this model also comes with standard 18-inch alloy wheels.

The new 3 Series is now on sale in saloon and Touring body styles, while BMW has also added new entry-level models to the 1 Series range in the 114i and 114d.

BMW was also highly visible is London during the summer, supplying vehicles to the London Organising Committee for the Olympic Games (LOCOG) for athletes, personnel, media and VIPs involved with the world’s biggest sports event.

Fleet News: Does winning feel any less significant when you’ve achieved it more than once?

Steve Chater: It’s always nice to receive awards for good products and services and being consistent in our offer.  Winning the FN50 reliability survey in 2010 was the same although we had won it before. Reliability is an important issue both for fleets and drivers, and it was gratifying to see our success repeated.

We always strive to improve our performance. If we consider our approach to EfficientDynamics from launch in 2007 it was something we wanted to have in the complete range of cars.

We’ve taken it a stage further now with the EfficientDynamics versions of the 3 Series, 5 Series and now X1.

The 520d ED has been very successful and its CO2 of 119g/km shows how we wanted to push boundaries.

eople can choose this car, which has a BIK tax band of 17%, in the knowledge that it takes the product further forward and introduces it to a new audience.

We’ve also recently launched the 520d GT, which puts that car in front of a new audience. It offers a level of luxury and refinement but allows greater flexibility in terms of its space and configuration.

FN: For so long people have had the choice of either petrol or diesel, but now we’re seeing more choice. Is it important to meet demand for other powertrains?

These cars deliver that while offering lower CO2 emissions and better fuel consumption than conventional engines with the same performance.

Demand in the US has helped drive the development of this technology, but it has also allowed us to give customers more choice.

We are now able to apply our EfficientDynamics technology to petrol models where appropriate and have begun to offer the 320i ED saloon, which uses a 170bhp petrol engine but also achieves 124g/km and 53.3mpg.

Those CO2 emissions put it in the same BIK tax bracket as the 320d ED saloon because of the 3% diesel supplement.

We don’t expect a vast amount of interest or a large-scale switch from diesel to petrol, but for some low-mileage drivers the petrol option will be cost-effective and it’s important to offer a choice.

FN: Many of your vehicles were involved in the London Olympic Games logistics. What were the challenges in defleeting such large numbers of vehicles?

SC: Not all of the vehicles involved in the Olympics were our own.

Around 200 were electric and are experimental prototypes so were never destined for sale and there were a few ActiveHybrid 5 models, and 3,000 were a combination of Mini Countryman, 5 Series, 3 Series saloon and 3 Series Touring.

So we had a variety of vehicles and in relation to the number of vehicles we would see defleeted in a year it isn’t such a significant amount.

FN: We’ve seen an expansion of the Mini range, and it seems the brand is also dipping its toe in the commercial vehicle market. How seriously is this being taken?

SC: There has been massive interest in the Mini Clubvan since we first showed the concept vehicle at the Geneva Motor Show this year.

People with smaller businesses will be attracted to it, and we think when we announce more details, the wholelife costs and the low CO2 emissions should present a strong argument in the compact van sector.

SC: There still needs to be support in terms of the plug-in car grant.

The cost of developing these cars is high and they have high purchase prices which people are not prepared to pay at the moment. It might be possible to highlight the benefits of running electric vehicles in a total cost of ownership model.

While good products are important in winning corporate sales, particularly among user-choosers, Chater says BMW’s expertise and support for fleets and businesses runs right through the UK business.

Local business development managers undergo a training programme accredited by ICFM, which is likely to be a contributing factor to its success in the Fleet Manufacturer of the Year award.

Chater is under no illusion that the brand can take customers for granted and says it will continue to innovate to improve and increase choice for customers.